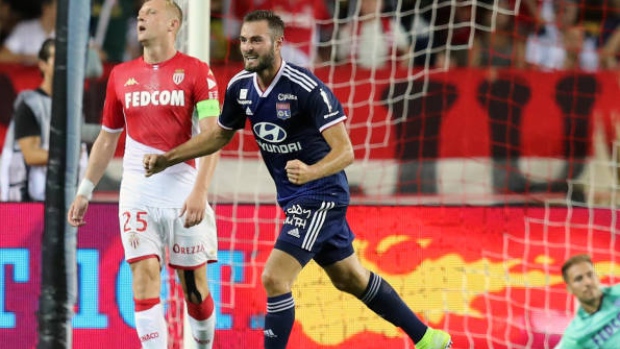 LYON, France — A rare goal from combative midfielder Lucas Tousart gave hard-working Lyon a 1-0 home win against a lethargic Juventus in the first leg of their round-of-16 game in the Champions League on Wednesday.

Tousart, who was sold to German side Hertha Berlin last month but loaned back for the rest of the season, netted in the 31st minute with a neat volley from a cross by midfielder Houssem Aouar.

“We heard before the game we weren’t favourites, and rightly so. But we played very well,” Aouar said. “We’re going over there (for the return leg) with a lot of confidence.”

Italian champion Juventus is bidding to end a 24-year-wait to win the Champions League, but woke up too late in this match.

“We were second to every ball in the first half, I don't know why. Something went wrong with our approach, I could sense from before kickoff something had not switched on," Juventus defender Leonardo Bonucci said. "We were all far from each other in the first half, making everything easy for Lyon. We need to work hard ahead of the return leg because we cannot afford another game like this in Turin.”

Still, Juventus nearly came away from Groupama Stadium with a draw.

Juventus star Cristiano Ronaldo threw his arms up in the air after the referee ruled against his late claim for a penalty, following an apparent push from behind by Lyon defender Jason Denayer.

Then, forward Paulo Dybala had a goal ruled out for offside in the 87th. A minute later, he also had a penalty shout turned down even though he seemed to be pulled back by a Lyon defender.

Juve coach Maurizio Sarri was incensed by both penalty decisions, leaping up and down on the touchline.

Yet he was equally bemused by his team's inability to move the ball quickly.

“I continued to tell them, and there were many who were doing it, that they were moving the ball too slowly and therefore getting into the wrong positions," he said. "The second half was better, but frankly it's not enough for a Champions League match.”

Ronaldo waved away a fan who ran onto the field in the fifth minute of injury time, apparently trying to take a photo with him. But positioned wide on the left, he was ineffective and never looked like scoring his 130th goal in European competition.

Well marked by Lyon's defence, however, he was limited to a snap-shot wide in a first half in which Lyon was better than the 35-time Italian champion. Lyon forward Karl Toko-Ekambi went close in the 21st when his header from a corner hit the crossbar.

Juventus defender Matthijs de Ligt walked to the side of the field in the 30th with blood pouring from the right side of his head after a teammate accidentally stepped on him following a corner. One minute later, with De Ligt receiving treatment, Lyon pounced.

Aouar cut inside down the left, beating two defenders, and whipped in a cross which Tousart clipped in despite being off balance.

Dybala struck a firm shot just wide of the left post in the 69th, with Lyon goalkeeper Anthony Lopes beaten.

The return leg is scheduled for March 17, with Italy in the grip of a coronavirus outbreak. The number of cases in Italy of the fast-spreading virus from China has reached 400.

A decision was taken Tuesday by French authorities to let Wednesday's match in Lyon go ahead with around 3,000 visiting fans of the Turin-based club.

The decision sparked disapproval from some politicians and residents close to the stadium. France's health minister Olivier Veran and Lyon's club president said there was no valid reason to stop Italian fans from attending.

In Wednesday's other game, Manchester City came from behind to win 2-1 at Real Madrid.