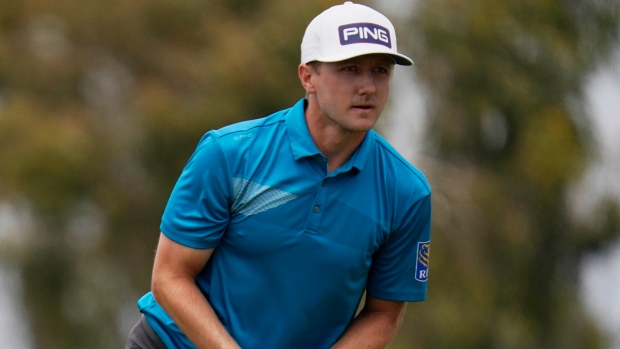 After starting the final round of the U.S. Open as the co-leader, Canadian Mackenzie Hughes finished the tournament seven shots behind winner Jon Rahm and tied for 15th with a score of one over par.

Here is a hole-by-hole look at his final round from Torrey Pines:

Hughes missed the green with his second shot and wasn't able to get his chip close enough, two-putting for an opening bogey five. This dropped Hughes to four-under, one shot back of leader Louis Oosthuizen, who opened with a par.

The Hamilton, Ont., native reached the green in regulation and left a lengthy birdie putt just short, tapping in for a par to steady himself after an opening bogey.

Hughes hit a sweeping draw off the tee to about 15 feet but was unable to convert on his birdie try, tapping in for par for the second straight hole. Hughes sits one shot back of co-leaders Oosthuizen and Russell Henley in a tie for third with Rory McIlroy.

The Canadian found a fairway bunker off the tee but stuck his approach inside 10 feet to give him a great look at birdie. Unfortunately, Hughes missed the short birdie putt to keep him at four-under and one shot off the lead in a tie for second.

Hughes found a bunker off the tee and splashed out into a greenside bunker. Hughes was unable to get up and down to save his par, dropping him to three-under and two shots back of the lead. Hughes' Sunday score now sits at two-over).

The 30-year-old continued his struggles on the sixth hole, recording his third bogey of the day to drop him to two-under and three shots back of leader Bryson DeChambeau at five-under.

With his title hopes slipping away, Hughes drained a 43-foot birdie putt on the Par 4 seventh to get him back to three-under and put him right back in the thick of things to two shots back of DeChambeau.

Hughes followed up his birdie on No. 7 with a par on the front-nine's second par 3 to keep him at three-under for the round and two back of the lead.

The Round 3 co-leader finished up his final round front-nine with a clutch birdie putt to get him to one shot back of co-leaders DeChambeau and Oosthuizen at the turn.

After Oosthuizen made a birdie putt to get to six-under, Hughes opened the back nine with a par after burning a birdie try past the right edge. He now sits two back of the lead at Torrey Pines.

Sitting two shots out of the lead at the U.S. Open, the unthinkable happened to Hughes on par 3 No. 11. Hughes hit his tee shot way left of the green and landed it on the cart path. The ball took a big bounce and got stuck in a nearby tree, forcing the Canadian to take a penalty stroke. Hughes chipped on and two-putted for a double-bogey to drop him to two-under for the week and four shots back of the lead at six-under.

After the calamity on the 11th, Hughes' misfortune continued as he dropped another shot on No. 12, falling to one-under and four shots back of Oosthuizen at -5.

After playing the last two holes at three-over, Hughes steadied himself with a solid stress-free par on No. 13. He continues to sit four shots back of the lead.

Hughes' chances have all but slipped away as the Hamilton native made his fifth bogey of the day to drop him back to even par for the week and five shots behind co-leaders Jon Rahm and Louis Oosthuizen.

Hughes' struggles continue as he finishes the 15th with another bogey, dropping him to one-over for the week. Meanwhile, Rahm drained his second birdie putt in a row to move to six-under and take the outright lead.

Hughes finished up his final par 3 of the week with a par, knocking his tee shot onto the green and two-putting.

Hughes stuck his approach close to 10 feet but was unable to convert on the birdie try and remains at +1.

Hughes' final round ends with a bang as the Canadian makes a birdie to get to even-par for the week.