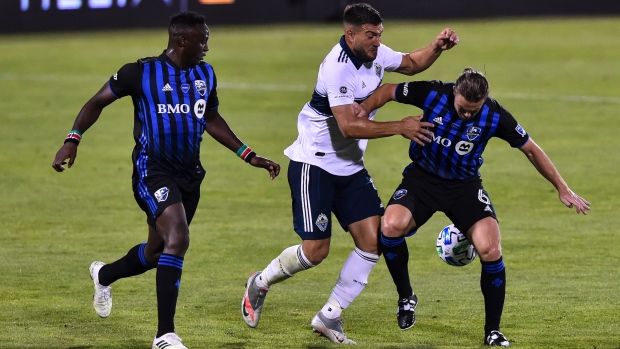 With a new team, new stadiums, and all three Canadian teams beginning the campaign playing out of American cities, Major League Soccer released the complete 2021 schedule ahead of the league’s 26th season on Wednesday.

Due to border restrictions caused by the ongoing pandemic, CF Montreal will be based out of Inter Miami CF Stadium, Vancouver Whitecaps will play in Real Salt Lake’s Rio Tinto Stadium, and Toronto FC will call Exploria Stadium in Orlando home.

The Canadian teams will continue to play out of these stadiums until a return to their home markets is permitted.

Seven MLS games will be broadcast on CTV this season, while TSN will show every Toronto FC and Vancouver Whitecaps match, along with many CF Montreal games.

CF Montreal and Toronto FC will open the season in a game broadcast on CTV/TSN on April 17.  The two teams will play again on Aug. 27 during Rivalry Week, and play once more, two weeks before the end of the regular season, on Oct. 23.

CTV and TSN will also air the May 8 match between CF Montreal and Vancouver Whitecaps.

The Whitecaps will open their season against Cascadia rivals Portland Timbers on April 18 at Rio Tinto Stadium in Sandy, Utah on TSN.

They will then head to Orlando for their second match of the season against Toronto FC on April 24 on CTV/TSN.

All 27 teams will play 17 home and away games during the 2021 season, with the top seven teams from each conference qualifying for the 2021 MLS Cup Playoffs.

Other highlights of the regular season include Austin FC making their debut as the league’s 27th club as they head to Banc of California Stadium to play LAFC on April 17.

The club will also play their inaugural home match and celebrate the opening of Q2 Stadium against the San Jose Earthquakes in June.

FC Cincinnati will open West End Stadium in a debut match against Inter Miami CF on May 16.

MLS Cup Champion Columbus Crew will move into New Crew Stadium as they host the New England Revolution on July 3.

The Crew will also host Seattle Sounders in a rematch of the 2020 MLS Cup final during the first weekend of Rivalry Week on Aug. 21.

The first installment of the El Trafico rivalry between LAFC and La Galaxy will take place on May 8.

Decision Day will be held on Nov. 7 as teams will face intra-conference opponents to lock up both positions and seeding for the MLS Cup Playoffs.