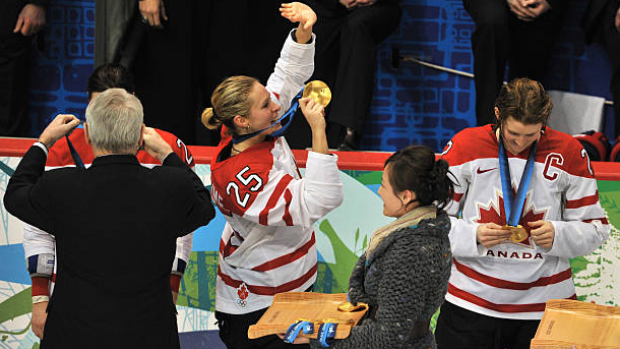 Before Tessa Bonhomme was an Olympic gold medalist and two-time world champion, she was just another Canadian kid curious about playing hockey at her daycare.

“There were a majority of boys there with myself and my sister – I was one of three girls – and that’s all they did was play street hockey,” Bonhomme said. “So, if you wanted to play with anybody else except for your sister, I had to go play some hockey. So I did and I had fun with all my friends and, luckily enough, my daycare supervisor  – her husband coached an outdoor team – saw how much fun I was having and asked my parents if I’d want to play.”

While the Sudbury, Ont., native ended up on a team of all boys, Bonhomme says being the only girl didn’t cause any barriers.

“I guess I was fortunate enough to play on teams where nobody treated me any differently than I was,” Bonhomme remembered. “My mini-stick was thrown in the pile just like anybody else’s mini-stick. I was on whatever team I was on and nobody was mad or upset about it. We were all there to have fun together, to play, and I think that’s what made me fall in love with the game so much. Even though I was going to practice or somewhere where I was supposed to work hard, I didn’t mind doing it because it was a free hangout session with my friends.”

Bonhomme says it took a little time to learn the ropes, but her coaches and teammates were supportive of her because everybody had the same goal in mind – having fun.

“I think the most uncomfortable part about it in the beginning was just getting used to the skates and the gear and being comfortable, myself, in all of that stuff,” she said. “But then once I got more comfortable on my feet and I could skate around a little bit, it obviously took me a little while, but nobody was making fun of me for it. It was more of being out there with my friends and I’m having a good time, enjoying myself for an hour and going home. It was almost like a play date with everything I could have imagined.”

As Bonhomme’s game on the ice continued to grow, the skills she gleaned from hockey aided her in other aspects of her life.

“Hockey helps socialize you and lets you play with people from all walks of life and I think that’s helped me to be successful – not only on the ice, but in my work off the ice as well,” Bonhomme said. And learning to work with others – sometimes I’m not good at something, but I have a teammate who is good at something, so that’s okay. They can cover that part of the ice for me, or vice versa and being okay with your strengths and working with them and being okay with your weaknesses and having somebody help you and knowing that there’s someone there to lean on. Often people think sports is just about being a jock and being a superstar and winning trophies and coming out a hero when really, there’s a heckuva lot more to sports, hockey in particular, than that. I think you learn a lot about yourself and a heckuva lot about each other.”

Bonhomme’s progression through hockey saw her join the Sudbury Lady Wolves as a teen before jumping to the NCAA with the Ohio State Buckeyes.

When the call came for Bonhomme to join Canada’s National Women’s team it was a dream come true to find herself among the greats of the sport. As the excitement from simply just being there wore off, Bonhomme discovered she was among a group of women just like her.

“It was a whirlwind of emotions,” Bonhomme said. “That first practice, I was really excited to be there, but at the same time, was my skill set up to snuff? It was just a matter of going in there and getting to know all of the ladies who I looked up to all my life, the people I had on posters in my room. And then just to see that they’re like anybody else. They’re the same people. They drank the same beer after the game as me. They made the same jokes as me in the locker room. I think once you get past that and realize that everyone is human.”

As a member of Team Canada, Bonhomme was able to do what so few athletes have the chance to: win an Olympic gold medal in her home country as a member of the team that captured gold at Vancouver 2010. For Bonhomme, playing for Canada on the world stage was a privilege that can’t be replicated.

“Being able to throw on your country’s jersey and go out there and represent on the international stage is bar none, hands down, the best thing that anybody can do,” Bonhomme said. “I know NHL players think playing in the NHL is the best, but you go to an Olympic Games and you feel that rush and you feel that high and you realize this is on the world stage with the best of the best coming together. You get to don your country’s colours and walk out in the opening ceremony where someone is waving that flag. I don’t think there’s any experience that I can have that will ever come close to meeting that.”

So what advice would Bonhomme have for a young person thinking about giving hockey a try?

The same advice her father gave her.

“Why not? Go ahead and do it and if you don’t like it, you can always come home. But if you don’t give it a good shot, then how will you ever know?” Bonhomme said. “That’s the way I’ve approached everything in life. If there’s an opportunity that presents itself, take a jump at it. Why not? If anything, you’re gonna learn something new about yourself. You’re only going to make another friend and I don’t see any benefit from shying away from anything. Go ahead and do it. Worst case, you’re gonna have some fun.”