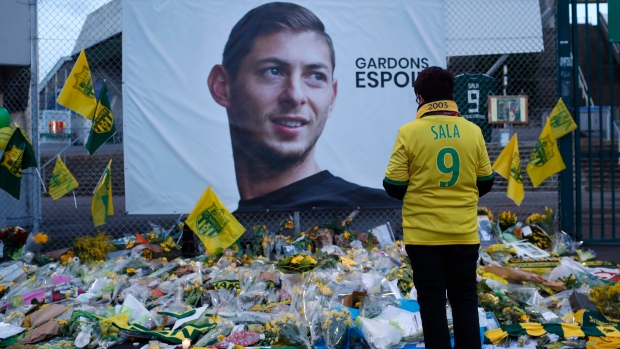 LONDON — English police investigating the death of Argentine soccer player Emiliano Sala say a man has been arrested on suspicion of manslaughter.

A single-engine aircraft carrying Sala and pilot David Ibbotson crashed in the English Channel on Jan. 21. The body of Sala, who had just signed for Cardiff City from French club Nantes and was travelling to join his new club, was recovered from the wreckage two weeks later.

Police in the southwest English county of Dorset, where Sala's body was brought in February, have been investigating the circumstances of the player's death.

Detective Inspector Simon Huxter, of Dorset Police, said a 64-year-old man from North Yorkshire in England was arrested on Wednesday on suspicion of "manslaughter by an unlawful act." Huxter said the man assisted with police inquiries and was released from custody under investigation."