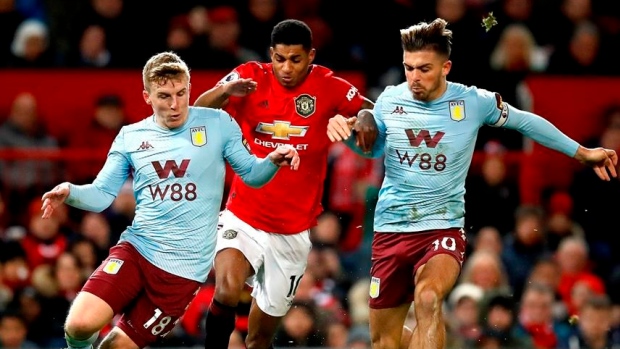 It seemed United was getting into gear when Victor Lindelof’s header put the Reds 2-1 ahead at Old Trafford from having been a goal down. But the lead lasted just two minutes before Villa hit back with Tyrone Mings’ 66th-minute volley.

Earlier, Jack Grealish had given Villa the lead with a fine finish into the top corner after cutting inside.

“We created loads of big chances that should have won this game but overall I don't think we deserved to, especially after the first half,” United manager Ole Gunnar Solskjaer said.

He was particularly critical of United’s slow start given that he’d rested the entire starting XI for Thursday’s Europa League game in Kazakhstan.

United’s equalizer just before halftime was written up as an own-goal for Tom Heaton, but really belonged to Marcus Rashford.

The United forward jumped for a header which came off the post and ricocheted into the net off Heaton’s back before the Villa goalkeeper could react.

“I sit here frustrated probably because of the manner of (United’s) first goal, which marred the performance of the first half," Villa manager Dean Smith said.

"That goal got their tails up and they started the second half better but we weathered the storm.”

Villa is 15th, three points above the relegation places in its first season back in the Premier League since 2015-16.