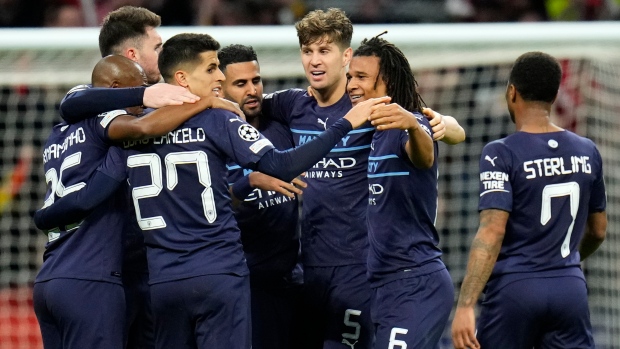 MADRID (AP) — In the end, it was Pep Guardiola getting the better of Diego Simeone in the battle of contrasting styles in the Champions League.

Atlético Madrid couldn’t find a spark for its struggling attack and was held to a 0-0 draw by Guardiola's Manchester City on Wednesday in a game that featured more heated exchanges and rough fouls than clear-cut chances and fluid play.

The result put City through to the semifinals thanks to its 1-0 win in the first leg at home, and kept alive its hopes of winning Europe’s top club competition for the first time.

But the game was marred by ugly scenes as the teams left the pitch. A scuffle had broken out between players during the final minutes as Atlético accused City of time wasting, and the animosity spilled over into the tunnel as the teams walked off after the game. Extra security had to be called in to keep players and officials from the two camps separate. Some players had to be restrained as police officers intervened.

“We have to congratulate our rivals, they played a great match with the type of soccer that we are used to seeing,” Simeone said. “It hurts to be eliminated but I’m proud of what we are and of how we compete.”

Simeone started smiling and applauding when City resorted to time-wasting in stoppage time, though he later said he was only pushing his fans to keep supporting their team. He also appeared to take a shot at Guardiola when asked after the match if he felt the City coach had disrespected him by saying it was hard to play against overly defensive teams like Atlético.

“Many times, those who have a great lexicon, are very intelligent and are capable or praising you with a contempt," Simeone said. But we are not fools, even though we may have a smaller lexicon.”

Atlético tried to leave behind its more defensive-minded approach and created some danger, but it still managed only three attempts on target after having none in the first leg.

“In the second half, they were better than us and we were lucky that we didn’t concede," said Guardiola, who became the first coach to reach nine Champions League semifinals. “Overall, though, we are in the semifinals and it’s deserved.”

The hosts played the final minutes a man down after defender Felipe was sent off for kicking an opponent. The benches had been cleared a few moments earlier as Atlético's players appeared upset with City's attempt to waste time.

The match ended with more than 12 minutes of stoppage time and Atlético had a couple of goods chances to break the deadlock but couldn’t capitalize on them.

In the other quarterfinal on Wednesday, Liverpool advanced past Benfica to set up a semifinal against Villarreal, the modest Spanish club that eliminated Bayern Munich on Tuesday.

Atlético was able to have the Wanda Metropolitano Stadium at full capacity after the Court of Arbitration for Sport on Wednesday accepted the club’s appeal to overturn UEFA’s closure of a 5,000-seat section as punishment for a fan’s Nazi salute in the first leg in England.

The club was trying to reach the semifinals for the first time in five years.

Atlético is now winless in its last seven Champions League games at home, while City is unbeaten in its last 13 away games in all competitions, with 10 wins.

Playing in its 100th Champions League game from group stage to final, City controlled possession early on and kept Atlético from creating any significant threat.

Criticized for playing overly defensively in the first leg, Atlético tried to press forward more often at the Metropolitano and ended with more total attempts than City. But Atlético’s top forwards, including starters Antoine Griezmann and João Félix, failed to score again, as did veteran Luis Suárez after coming off the bench near the end.

“We had our chances,” Atlético midfielder Koke Resurrección said. “When the ball doesn’t go in, all we can do is congratulate our rivals. But Atlético deserved more.”

Atlético has been held scoreless in its last three matches in all competitions, with only four total shots on target.

Griezmann nearly found the net with a volley from outside the area in the 57th, Rodrigo De Paul’s shot just missed wide in the 70th and substitute Matheus Cunha came close in the 86th when his close-range shot was blocked in front of the goal.

City had one of its best chances when Ilkay Gundogan hit the post from close range in the 30th.

The English side has kept seven clean sheets in its last eight away games in all competitions.