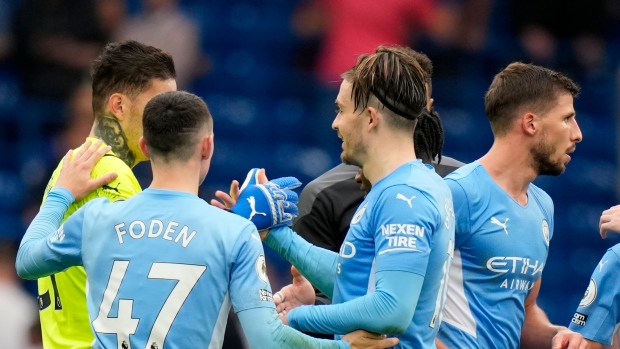 LONDON (AP) — Pep Guardiola has made some curious team selections in Manchester City’s run of losses against Chelsea.

This time, he got it just right.

In a surprisingly one-sided match between two Premier League title contenders, City delivered a statement performance in a 1-0 win at Stamford Bridge on Saturday that could easily have been heavier had Guardiola had an out-and-out center forward.

In the end, Gabriel Jesus — the closest thing City has to a striker — scored the winning goal in the 53rd minute from a shot on the turn that deflected off the heel of Chelsea midfielder Jorginho and squirmed into the bottom corner, with goalkeeper Edouard Mendy rooted to the spot.

Chelsea had beaten City in their last three meetings — most recently in the Champions League final in May — but was outplayed at Stamford Bridge, not even registering a shot on target.

Guardiola deployed a genuine defensive midfielder in Rodri this time — unlike in the Champions League final, when Ilkay Gundogan was overrun in that position — and he protected the defense superbly, helping limit Chelsea striker Romelu Lukaku to scraps.

So, would people be right in saying that simply was the difference compared to that disappointing 1-0 loss in Porto?

“Maybe. Maybe they are right,” Guardiola said. “When we win, a manager is a genius. When we lose, we are losers, failures.”

City’s previous losses to Chelsea — in the league and in the FA Cup semifinals toward the end of last season — had also seen Guardiola tinker with his lineups. But he played his strongest possible team here, with Aymeric Laporte back to shore up the defense, and City was irresistible at times.

“They made us underperform,” Chelsea manager Thomas Tuchel said. “And it was deserved.”

The result lifted City above Chelsea in the standings, on goal difference after six games, but there was a greater significance to the victory.

After its strong start to the season — four wins, a draw at Liverpool and only one goal conceded — Chelsea had been anointed by increasing numbers as the title favorite.

But the way City dominated possession and reduced Chelsea to mostly long balls showed that Guardiola’s team, the defending champion, might still be the team to beat.

Although City has had some big wins this season, like the 5-0s against Norwich and Arsenal and a 6-3 over Leipzig in the Champions League, a 0-0 draw with Southampton last weekend was a glaring reminder of the fact Guardiola failed to sign a striker in the offseason to replace Sergio Aguero.

And against Chelsea, Guardiola’s team saw much more of the ball in midfield — the Spanish coach essentially played five attacking midfielders ahead of Rodri at the base — but there was no striker to make the kind of runs to finish off the flowing moves.

And, in the end, it required a lucky break to make the breakthrough after Joao Cancelo’s shot from the edge of the area landed at the feet of the Brazil forward, who was again used as a right winger at Stamford Bridge.

City regularly picked off Chelsea on the break after that, and only a goal-line clearance by Thiago Silva, who came on for the injured Reece James in the first half, prevented Jesus adding a second.

As for Chelsea, it had the kind of striker Guardiola craves — Lukaku — but he barely saw the ball. And when he did, his link-up play was off.

The hosts missed the energy of injured midfielder Mason Mount, in particular.

“Today the guys were outstanding,” Guardiola said. “At this stadium and against this opponent, to do what we have done makes me so proud.”