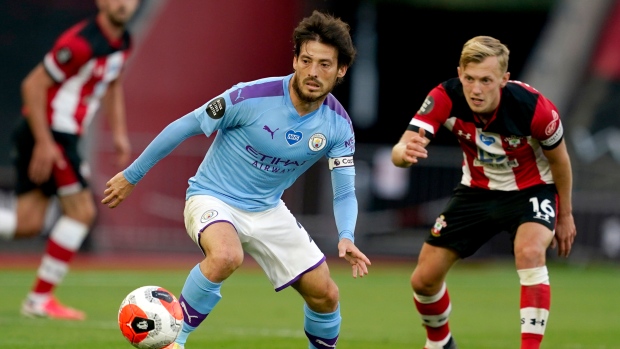 David Silva's mind is made up - he's leaving.

In the wake of his star turn in Manchester City's 2-1 win over Bournemouth on Wednesday, manager Pep Guardiola says he can't convince the 34-year-old club legend to extend his stay at the club. Silva announced his intentions to leave City with the expiry of his contract at the end of this season last summer.

Silva had a goal and an assist in the win over the relegation-threatened Cherries.

"He has decided to leave, he has said many times. I think he wants to finish after 10 seasons here," Guardiola said. "He's been in incredible top form since we came back from the lockdown. He played another exceptional game and scored again, two times in a row a fantastic goal. Hopefully he comes back for a farewell game that he more than deserves and he can find a place for the last years of his career."

A winner of 11 trophies with City over his decade with the club, including four league titles, Silva can still add to his haul before his departure with City still alive in the Champions League and FA Cup.

Silva's assist on Gabriel Jesus's goal on Wednesday was his 93rd in the Premier League since joining the club, the most helpers by any player during that timeframe by 29.

A World Cup winner and two-time EURO winner with Spain, Silva has made 307 appearances in the Premier League - a club record.