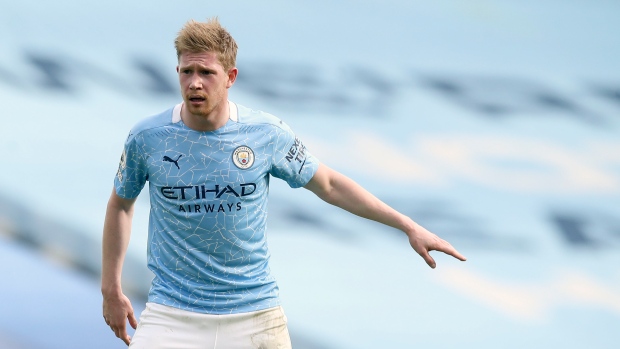 Manchester City confirmed on Monday that Kevin De Bruyne will miss out on the Premier League's leaders' midweek fixture with Aston Villa.

The Belgium midfielder was substituted early in Saturday's 1-0 FA Cup semi-final loss to Chelsea with an injury to his ankle and right foot.

"The extent of the problem is not yet known," the team said in a statement.

De Bruyne, 29, came off in the 48th minute and was replaced by Phil Foden.

Following Wednesday's match with Villa, City takes on Tottenham Hotspur at Wembley on Sunday in the League Cup final before heading to France on Apr. 28 for the first leg of the Champions League semi-final against Paris Saint-Germain.

De Bruyne, last season's PFA Player of the Year, has made 35 appearances across all competitions this season, his sixth with City. He has eight goals.

City hold an eight-point advantage over Manchester United atop the table with six matches remaining on the season.