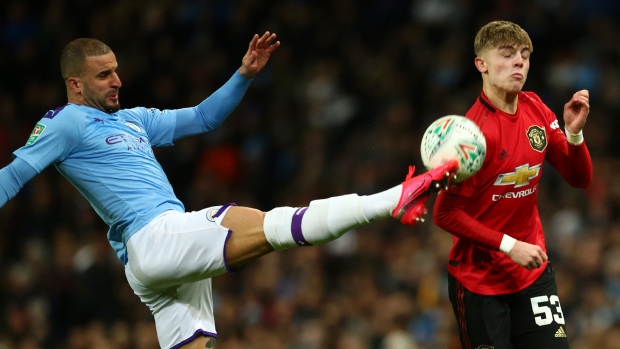 MANCHESTER, England — Pep Guardiola slumped to his haunches in the technical area and put his head in his hands after seeing his Manchester City players squander yet another clear-cut opportunity.

With a few minutes remaining in a one-sided, two-legged English League Cup semifinal against fierce rival Manchester United, City's profligacy had somehow managed to leave the contest in the balance and it was all getting too much for their manager.

City got there in the end. Just.

A 1-0 home loss to United in the second leg Wednesday failed to stop City securing the chance to win the competition for a third straight season in a March 1 final against Aston Villa at Wembley Stadium.

City won 3-2 on aggregate, largely thanks to its brilliant first-half display in the first leg at Old Trafford three weeks ago when all the team's goals came in the opening 38 minutes.

“In both games, we were better,” Guardiola said. “I am so satisfied with the players.”

It didn't seem that way as City wasted chance after chance Wednesday, with out-of-form Raheem Sterling the biggest culprit.

City will be the big favourite against Villa having won a Premier League game between the teams 6-1 this month. Villa is in the relegation zone in the league.

Villa advanced, somewhat surprisingly, on Tuesday after beating Leicester 2-1 for a 3-2 win on aggregate. The better side lost that semifinal, and City could easily have gone the same way.

Even when Nemanja Matic, who gave United the lead on the night in the 35th minute, was sent off in the 76th for collecting his second yellow card, City still couldn't put the visitors away.

The most nervy part of the final minutes came when City defender Nicolas Otamendi gave away a clumsy foul on the edge of his area. Fred had United's last chance to score a goal that would have taken the match to a penalty shootout - there is no extra time or away-goals rule in the League Cup - but his free kick struck the wall.

United can at least take pride in beating its neighbour away for the second time in two months, having also won at the Etihad in the league.

“They have given me absolutely everything,” United manager Ole Gunnar Solskjaer said. “We have come a long way. Even though we did not create too many clear-cut chances, we pressed them back. It pleased me.”

City has won the second-tier cup competition the past two years, four times in the last six seasons, and six times in total.

A seventh title seems likely, though City's players will have to improve their finishing.

Sergio Aguero brought out two great saves from United goalkeeper David De Gea in the first half, while Sterling was wasteful in each half. His chance after halftime, when he raced through on goal, skipped round De Gea after cutting back inside and smashed the ball over the crossbar, drew that incredulous reaction from Guardiola in front of the dugouts.

“If we win the final, no one will talk about this game,” De Bruyne said. “The final is a nice day and we will fight to win the cup.”