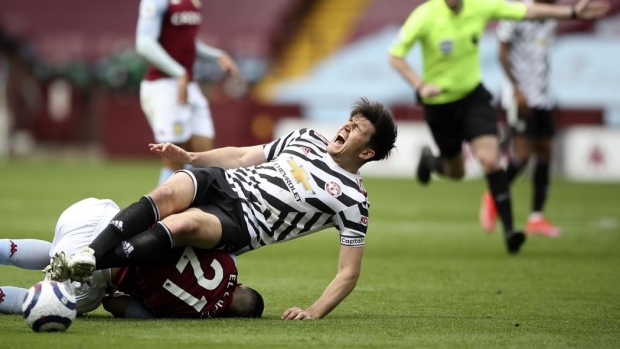 MANCHESTER, England (AP) — England defender Harry Maguire is set to be fit for the European Championship and could even play for Manchester United again before the end of the club season after an encouraging update on his injured ankle.

The center back was hurt in the second half of United's 3-1 win at Aston Villa in the Premier League on Sunday and was missing for the home game against Leicester on Tuesday.

“Obviously we've had scans, and the good news is there’s no fracture," United manager Ole Gunnar Solskjaer said before the Leicester match.

”(It is) ligament damage and hopefully we’ll see him again this season."

United's last game in the league is at Wolverhampton on May 23. Solskjaer's team then plays Villarreal in the Europa League final three days later.

Maguire missed his first league match since joining United from Leicester in the offseason in 2019.

England's first game at Euro 2020 is against Croatia on June 13.