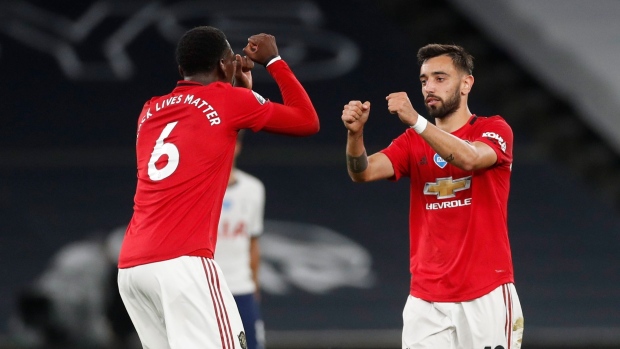 The 26-year-old Fernandes called reports of discord creations of the media.

"I think there has been a lot of speculation lately about this," Fernandes told Portuguese outlet SportTV after Portugal's 3-0 win over Sweden on Wednesday. "First, [the media] said there was a discussion with the teammates, and as that didn't sell, it was then with a teammate (reportedly Victor Lindelof), and as that didn't work either, it was with Solskjaer. I believe it's just a way of destabilizing the group a little bit."

Fernandes, signed in January from Sporting, also denies that he was angry about a half-time substitution in the Spurs match.

"When the coach told me that the game was over and that we would have many more [games] ahead, I understood that, of course. I was not satisfied with leaving, but I didn't speak or say, anything at that moment that could harm the group," Fernandes said. "Even after the game, the coach sent me a message to wish me good luck with the national team. He asked me and two or three other players if we thought we needed to offer some words of support to the group but, nobody wanted to speak because it wasn't the best moment."

The Red Devils have three points from their first three matches and Solskjaer is on the hot seat as United visits Newcastle on Saturday, but Fernandes backs his manager during this time of turmoil.

"I just have to be grateful to the coach because he was the one who wanted me, he was the one who believed in me and the tactics he uses are perfect for me," Fernandes said. "So, don't use me to make excuses, if someone wants to try to make trouble inside Manchester United, do not use my name or that of my colleagues or the coach. The atmosphere is good, obviously after a defeat we were sad, but we have to give an answer in the next game."

Following United's league match with Toon on Saturday, they travel to France for a Champions League encounter on Tuesday with Paris Saint-Germain and return home to Old Trafford for a date with Chelsea on Oct. 24.