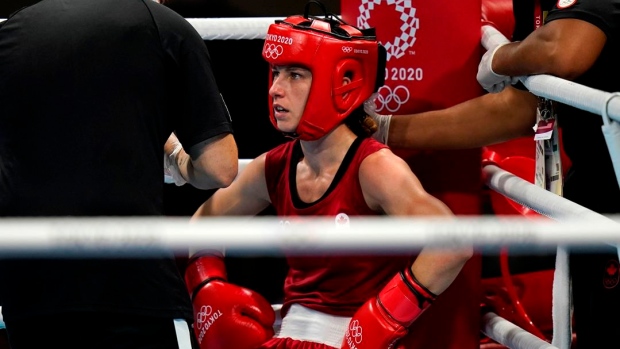 Five years after illness ruined her chances at the 2016 Rio Olympics, the 11-time national flyweight champion had dreamed of capturing a medal in Tokyo, but she was eliminated in the opening round.

Still, her months-long battle with the International Olympic Committee just to compete in Tokyo paved a new path for women athletes wanting to combine sport and motherhood.

Bujold stepped into the ring with the biggest opponent in sport — the International Olympic Committee — and won. In many ways, the victory was bigger than any medal podium she climbed in her illustrious career.

"That's definitely the win that came out of that (Olympics) for sure," Bujold said. "And something that'll continue to affect the next generation moving forward, which is definitely great."

The 34-year-old from Kitchener, Ont., announced her retirement on Wednesday and reflected on a long career that had plenty of highs, but also some gut-wrenching lows.

Bujold lost to Nina Radovanovic of Serbia in the opening round of the Tokyo Olympics in her first international bout in more than 18 months. Making matters worse, COVID restrictions meant her coach Syd Vanderpool wasn't in her corner when she needed him most.

In an interview moments after the bout, a tearful Bujold curled her hands into a heart sign to her daughter Kate Olympia — or K.O.

"One day, I'm going to be able to share the entire story with (Kate)," Bujold said that afternoon at Kokugikan Arena. "Absolutely this was a win for me on this journey. Unfortunately, it didn't happen in the ring, but it happened outside."

Bujold's battle to compete in Tokyo made international headlines. The trouble began when COVID-19 wiped out the 2020 season. Then the regional Olympic qualifier in Buenos Aires in early 2020 was scrapped due to rising COVID cases in Argentina.

The IOC Boxing Task Force decided to hand out berths based on world ranking, but arbitrarily chose three international events to determine ranking — events Bujold had missed because of her pregnancy and postpartum recovery.

Bujold, who couldn't have foreseen the pandemic interruption, had carefully timed her pregnancy to be back in top form for Tokyo, giving birth to Kate on Nov. 5, 2018.

Bujold and her lawyer, Sylvie Rodrigue, mentioned in their argument of a human rights violation that tennis ranking points are frozen during a player's pregnancy.

In its 41-page decision, CAS determined that the "Qualification System was to apply to everyone, regardless of sex, however in practice, it put people of a particular group (pregnant women) at a substantial disadvantage compared to others. This is indirect discrimination."

The panel also said that the failure to accommodate athletes post-pregnancy was in violation of the IOC's mission to support women athletes and implement equality in sport.

"The lack of consideration for pregnant and postpartum women risks portraying negative stereotypes about women in sports: women should not become pregnant if they have Olympic aspirations," the ruling said.

Bujold said there's a documentary on the whole ordeal in the works.

She has mixed feelings about Tokyo.

"My goals were always to win that Olympic medal, because I knew I got so close to that in Rio, I knew I was capable of doing that," she said.

"But it just seemed like there was barrier after barrier, obstacle after obstacle that got in my way to really be able to truly show what I was capable of on that stage. It's something as an athlete that’s always going to be in the back of my mind. Unfortunately, there's not really much you can do about that."

She plans to take a breath finally and think back on her good bouts, such as her back-to-back Pan American Games gold medals. She also won six of her seven fights post-pregnancy before the pandemic brought sport to a halt.

"I've never really taken time to even just enjoy my wins or enjoy the things that I did accomplish, because again, you're just always looking forward to the next thing, the next thing," she said. "I feel like I need to take time to really absorb everything that's happened in my career. And try to put it in a good place."

Bujold was eliminated in the quarterfinals at the Rio Games after a stomach bug sent her to the hospital the night before her fight. She was still receiving intravenous fluids hours before her bout and was so weak she could barely climb through the ropes to compete.

She then lost her longtime coach Adrian Teodorescu to cancer three months after the Rio Olympics.

She still works out regularly on the bags in her garage. She recently finished a nine-week course through the Canadian Olympic Committee's Game Plan, which helps athletes navigate post-competitive life. She might take up a new sport, just for fun.

"I've been trying to find a new balance of staying active and just feeling good," she said. "As an athlete it's so tough when you go from something that's been your only focus for so long, and then it's not your top priority . . . You're so used to being goal-oriented of: OK, if I do XYZ, it's going to lead me to this.

"I just have to work out because I know it's good for me and it's something that's going to help me feel better. I just have to kind of find new wins around it, which is challenging."

She plans to coach, and in fact is coaching at a competition this weekend with her club Destiny Boxing.

This report by The Canadian Press was first published April 20, 2022.