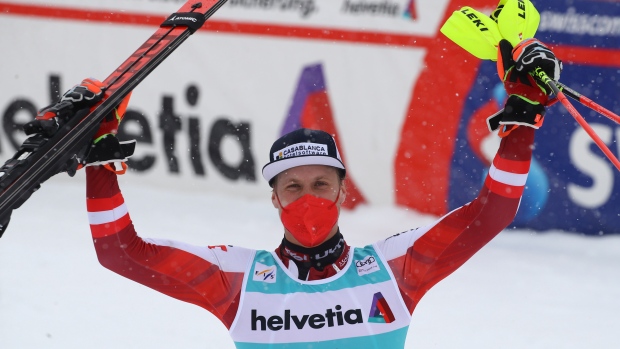 LENZERHEIDE, Switzerland — Rising from sixth place after the first run in a World Cup slalom, Manuel Feller won the season-ending race on Sunday.

Feller benefited from his Austrian teammate’s error and finished 0.08 seconds ahead of Clément Noël of France.

Alexis Pinturault placed third, 0.11 behind Feller, to end his season in style one day after winning a giant slalom to secure his first overall World Cup title.

Pinturault was the first Frenchman to win the overall title for 24 years and an emotional weekend for the team saw Jean-Baptiste Grange race for the last time in the World Cup.

The 36-year-old Grange retires with slalom gold medals from the 2011 and 2015 world championships.

The current world champion, Sebastian Foss-Solevaag, was among six of the 26 starters who failed to finish the first run in the morning, including Ben Ritchie who crashed out. The 20-year-old American was invited to compete at the finals meeting as the junior world champion.