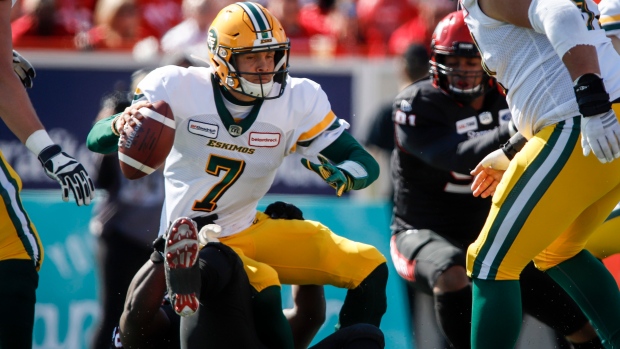 Life after Labour Day begins this week in the Canadian Football League and while we learned a lot in the West Division this summer we’re still trying to figure out the Edmonton Eskimos. They have the CFL’s top offence (336.1 yards per game) and defence (190.6 yards per game) and yet they’re just 6-5. Are they pretenders or contenders? And what about the other teams in the West Division playoff picture?

Farhan Lalji: I think they are contenders but they’ve got to figure out what to do in the red zone where they’ve been absolutely awful, especially against the other front-running teams in the West. The Eskimos are 0-4 against the Calgary Stampeders, Saskatchewan Roughriders, and Winnipeg Blue Bombers …

And in those four games, consider they’ve scored just three touchdowns. In two of those games kicker Sean Whyte had to go 7-7 on field goals. They’ve got to get it figured out in the red zone where other teams are finding ways to take away Greg Ellingson. Jason Maas and Trevor Harris need a Plan B when they get inside the 30-yard line.

Dave Naylor: Part of their struggles on Labour Day against the Stampeders was the way the Stampeders’ defence was playing as that unit looks to be rounding into form. And offensively, stars are emerging for the Stamps this year:

This team looks primed for a good stretch run.

Lalji: And they’ve got Bo Levi Mitchell back … Usually as we get into this stage of the season, the Stampeders are just trying to fine tune, tinker and make sure nobody gets injured; there’s less motivation. But now with Mitchell back and the West Division very close, there’s going to be plenty of motivation.

Naylor: And they’ll continue to be challenged by both the Roughriders and Blue Bombers, who both have their eye on finishing first in the West. We saw how good these teams are on defence on Labour Day Sunday. You look at the Bombers, with Willie Jefferson and Adam Bighill, two guys who are among the best  defensive players in the league. And the Roughriders can boast the same thing with linebacker Derrick Moncrief and of course on the defensive line, Charleston Hughes.

The big question for the Bombers, compared to Saskatchewan where Cody Fajardo has filled in nicely at quarterback, is can Chris Streveler evolve into a passing quarterback the rest of the way.

Lalji: You look at Fajardo and I think he should be in the Most Outstanding Player discussion with the season that he’s had, but with Streveler, there remain questions. Everybody loved this guy when Matt Nichols was in, fans were calling for him. And Paul LaPolice has done a very good job of trying to incorporate his legs, and change the look of the offence, but at some point he’s got to be able to show that he can consistently be able to push the ball down the field. As good as he is with his legs, when you face those top defences in the playoffs, they’re going to find a way to minimize the damage. Obviously the Bombers are going to get a big boost once Andrew Harris gets back in the lineup but that won’t happen for the Banjo Bowl this week.