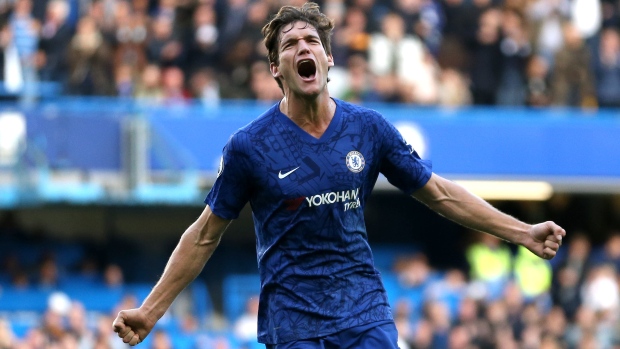 LONDON — Marcos Alonso scored his first goal of the season to give Chelsea a 1-0 win over Newcastle, lifting Frank Lampard's team provisionally into the top four of the Premier League.

Alonso broke the deadlock in the 73rd minute at Stamford Bridge as the Blues earned their fifth straight victory in all competitions.

After a slow start to the campaign, Chelsea is now two points ahead of fifth-place Arsenal, which plays Sheffield United on Monday.

Callum Hudson-Odoi, fresh from his starring role for the England Under-21s during the international break, was impressive again for Chelsea.

The winger's early cross was headed wide by Willian before he cleverly teed up Mason Mount in the area, the midfielder turning smartly only to place his shot too close to Martin Dubravka, who made a fine save.

Ross Barkley, who scored twice for England in Bulgaria in European Championship qualifying, was handed a Chelsea start in place of the injured N'Golo Kante, but his afternoon was cut short by an injury and he limped off before the break.

Chelsea were inches from opening the scoring 10 minutes into the second half when Abraham's header flicked off defender Ciaran Clark and thumped against the crossbar.

The winner finally came when Hudson-Odoi fed the ball to Alonso to drill home.