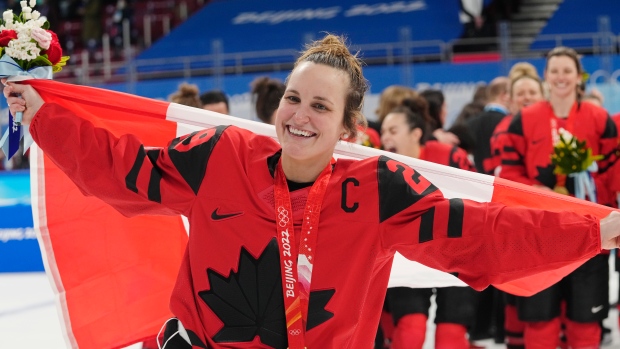 Marie-Philip Poulin has now scored in every gold-medal game she's played in at the Olympics.

The Canadian captain scored two goals in a 3-2 win on Thursday over Team USA, making her the only hockey player – female or male – to score in four Olympic gold-medal games.

Poulin has scored seven of Canada's last 10 goals in gold-medal games at the Olympics, and after scoring the game-winner Thursday, now has four gold medal-clinching goals.

​Her first gold medal-winning goal came at the 2010 Olympics, when she scored both goals in a 2-0 win. Her second came in 2014 when she scored the game-tying goal and the overtime winner.

Poulin also found the back of the net in overtime to beat Team USA in the final of the 2021 IIHF Women’s World Championship.

After missing out on the gold in 2018, Poulin said the 2022 medal holds a special place in her heart.

"Every medal is a different story. They're unique. This is a special one," Poulin said. "The veterans who have been here since 2018, they felt that loss in the shootout. It was a hard one for all of us.

"We came back together. We were ready to go."

Since 2010, Poulin has outscored Team USA 7-6 in gold-medal games at the Olympics.