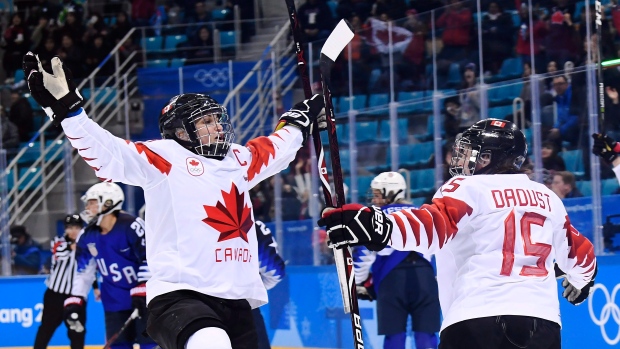 USA Hockey and Hockey Canada are holding a joint women's camp Nov. 4-10 near Pittsburgh with exhibition games scheduled for Nov. 8 and Nov. 10.

Both federations are trying to backfill their national teams' seasons with extra competition.

The Canadian Women's Hockey League folded after last season and national-team players from both countries are among 200 who have boycotted the U.S.-based NWHL.

The annual international Four Nations Cup in November involving Canada, the U.S., Sweden and Finland was cancelled this year because the host Swedish women's team is in a dispute with its federation.

Hockey Canada has scheduled an additional seven four-day camps this winter for the Canadian women in Montreal, Toronto and Kitchener, Ont., as well as giving the players access to three coached skills sessions per week in the regions they live, compared to one last season.

Thirty Canadian players are skating this week at a second camp in Montreal.

"This is a unique season for our national team," Kingsbury said Wednesday in a statement.

"The opportunity to play the United States will complement the variety of camps and programs we have scheduled to ensure our athletes are competing at the highest level.

"Working with USA Hockey on this series will not only provide fans an opportunity to watch the best players from both countries, it will benefit our program as we continue to evaluate our athletes in advance of the world championship."

Canada is the host team of the 2020 women's world championship in Halifax and Truro, N.S.

Canada's Pennsylvania roster is minus a few notable names such as Rebecca Johnston, Brianne Jenner and goaltender Shannon Szabados and includes half a dozen women playing for NCAA schools.

Canada will also face the reigning world and Olympic champion Americans in the Rivalry Series that opens Dec. 14 in Hartford, Conn.

Hockey Canada has yet to name its rosters for those games.