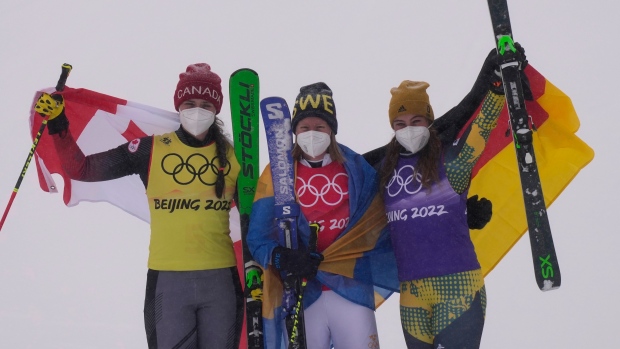 ZHANGJIAKOU, China — Canada's Marielle Thompson has won the silver medal in women's ski cross at the Beijing Olympics after finishing second in a drama-filled final.

Thompson, from Whistler, B.C., made a late push in the big final to finish behind Sweden's Sandra Naeslund, who led the race from wire to wire.

Switzerland's Fanny Smith appeared to win the bronze medal, but she was disqualified after a lengthy post-race review.

It's the second Olympic medal for Thompson, who won ski cross gold at the 2014 Sochi Olympics.

Canada had four skiers in the semifinals, but only Thompson advanced to the big final.

Schmidt and Thompson had the fourth and fifth best times respectively in the seeding round.

Phelan and Hoffos were not far behind them, finishing the seeding seventh and eighth.

Both Phelan and Thompson are returning to the Olympics after devastating injuries earlier this season.

Phelan blew out her knee in February 2020 in Megève, France, when she overshot a jump and landed on one leg.