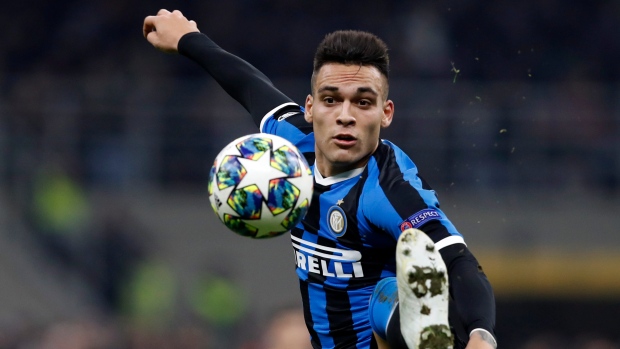 MILAN — Inter Milan might just lose out to Barcelona again.

The Italian club was eliminated from the Champions League following a 2-1 loss to Barcelona on Tuesday, and the Spanish club was reportedly so impressed by Lautaro Martínez’s performance that it is ready to activate the Inter forward’s 111 million euro ($123 million) release clause.

Martínez ran the Barcelona defence ragged, set up Romelu Lukaku’s equalizer and also had two goals ruled out for offside. He also scored when the two clubs faced each other in October.

“We are Inter Milan, with an important history — like Barcelona — and we don't have to necessarily sell anybody," Inter CEO Guiseppe Marotta said. “We want to grow, so we want to concentrate on our youngsters like Lautaro Martínez or Lukaku, they are interesting and young and we want to grow with them.

“But as you know, the future of a player is in their heads. If Lautaro wants to stay with us, we are happy with that, if he will be attracted by the ideas of other clubs we will evaluate the situation. At the moment he is very tied to Inter and we are proud.”

Martínez signed a contract until 2023 when he joined Inter from Racing Club last year and there is already talk of improving that deal to keep him at the club.

The Argentina forward scored nine goals for Inter last season but has exploded this campaign and has already found the back of the net 13 times in a formidable partnership with Lukaku under coach Antonio Conte.

“There is the right chemistry between them," Marotta said. “Antonio Conte, a proven winner, knows how to get the best out of them.”

That partnership could prove crucial to keeping Martínez at the club.

“Inter is my home. I spend most of my life here and that for me matters a lot,” Martínez said. “Everyone has shown me affection from the very first day and that is fundamental for a player and a man."

Martínez and Lukaku’s partnership has been key to Inter reaching the top of the Serie A standings. The club is two points above eight-time defending champion Juventus.

Inter visits Fiorentina on Sunday and hosts Genoa in its final match of the year.

“We can’t make the mistake of dwelling on this defeat too much,” Inter defender Cristiano Biraghi said. “It’s part of the game. We’re professionals. Sunday will be a good test of our maturity as a side.

“Florence is a difficult place to go, the atmosphere is always intense when big teams play there and the home team feed off that. They’re not on the best form and because of that they’ll want to give even more.”