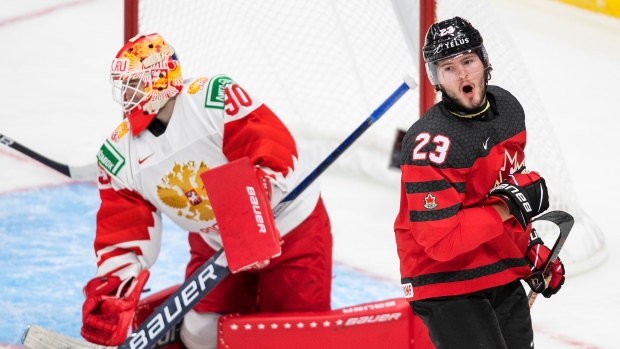 Mason McTavish had two goals and an assist as Canada overcame an undisciplined second period to beat Russia 6-4 in their lone pre-tournament game before the World Junior Championships start on Boxing Day.

McTavish, Ridly Greig, Kent Johnson, and Lucas Cormier scored first-period goals for Canada, as they jumped out to a 4-0 lead after the opening frame.

McTavish and Johnson, the No.3, and No.5 overall selections in the 2021 NHL Draft, respectively, dominated when on the ice, with the two combining for five points on the night.

"We've got some good chemistry going," McTavish said about his chemistry with Johnson. "He always puts it in the wheelhouse. It's a treat to play with him."

"I think they moved the puck really well," said Canadian coach Dave Cameron. "Chemistry is a hard thing to define, but for them to develop it so quickly, it's exciting."

Canada gave Russia plenty of opportunities to claw back early in the second, taking three penalties before the five-minute mark of the period. Russia capitalized twice on its four chances in the period before McTavish scored his second of the game to give Canada some breathing room.

"A four-goal lead in the first-period is never a bad thing," McTavish said. "We just got into some penalty trouble."

McTavish opened the scoring at 6:24 of the first, potting Canada’s first of two power-play goals in the period. Greig scored 50 seconds later to make it 2-0 for Canada.

McTavish picked up his second point of the game on Johnson’s goal, while Cormier scored Canada’s second PP goal of the game, giving Canada the four-goal lead entering the second.

Russia got goals from Winnipeg Jets prospect Nikita Chibrikov, Michkov, and Alexander Pashin in the second period, the first two with the man advantage, to close the deficit to 5-3 after two periods. Michkov, another highly touted prospect for the 2023 NHL Draft, added his second of the game with under a minute remaining.

"His shot stands out," Winnipeg Jets' prospect Cole Perfetti said of Michkov. "He can score. It's the first time I've seen him play. You can't really give him many opportunities to get his shot off."

Chibrikov scored Russia’s first of the game on the power play, deflecting a pass from Semyon Demidov past Canada's Dylan Garand.

Michkov scored Russia’s second goal, as he fired a one-timer past Sebastian Cossa with nine minutes remaining in the frame.

After Russia closed the gap to 4-2, McTavish scored his second of the game, outwaiting Russian goaltender Yaroslav Askarov and tucking it into the open net to re-gain Canada’s three-goal lead.

Garand allowed one goal on 15 shots before being relieved by Cossa midway through the second period. Cossa, who plays for the hometown Edmonton Oil Kings, stopped eight of 11 shots.

Canada outshot Russia 38-26 in the game.