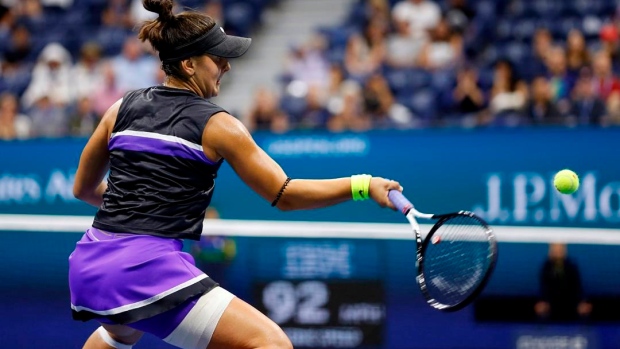 This week TSN is celebrating Rafael Nadal's French Open dominance by replaying his best matches at Roland Garros. The King of Clay has won 12 titles in Paris, but whether he'll get a chance to go for No. 13 this year remains in question. In a normal year, the second week of the French Open would be playing out now, but due to the COVID-19 pandemic, organizers have postponed the event to late September after the US Open.

"I'll be very surprised if the French Open gets held," said Tennis Channel and NBC analyst Mary Carillo. "I'll be surprised if the US Open goes forward. They've already laid out protocols that they think can help in staging it without fans, but there are so many provisos. I'm a chick from Queen's. I love the US Open. I mean, this is what I grew up loving and it's what made me want to become a professional tennis player, but it seems like what the USTA is hoping for is a very desperate thing."

In May, Nadal struck a similarly pessimistic tone in interviews with Spanish newspapers, noting the current season, "has been practically lost ... I would sign up to be ready for 2021."

For now, the tours have cancelled all events through July. A decision on August's North American hard-court swing, including the event in Toronto, is expected in mid-June.

"I agree more with Rafa than any of the other players I've been listening to," Carillo said while pointing out many of her colleagues are taking a different view. "Everyone's optimistic and I'm looking at it and saying, 'Guys, first of all, our country's on fire. And, more than that, this pandemic isn't even close to being solved or cured.' And now with all the protests and the riots going on people are yelling and screaming and there's tear gas which is making them tear up, cough and New York is already a hotspot. I mean, I'm watching my city burn. I'm watching what's happening to New York. So, the idea that the US Open can happen in just a couple of months seems almost like it's bad form."

During a conversation over Skype with TSN this week, Carillo shared some insight on what tennis events may look like without fans and who that may benefit. The 1977 French Open mixed doubles champion (with John McEnroe) also explained why she feels Bianca Andreescu and other young players will benefit from this lengthy break.

Is it possible to hold a major event like the US Open without a full slate of tune-up events?

"I guess you can. One of the things thrown out the other day was the idea that maybe the men shouldn't play three out of five [sets] at the US Open and Paris and keep it to two out of three, because they haven't been, obviously, in match mode for so long. You can do it, but my big question is, should you do it? You can try to make all kinds of accommodations in an effort for safety. You can charter planes and take the temperatures, but the fact is there is no vaccine and the testing in New York is so bogus with so many people going untested."

Whenever the tour restarts, there's a good chance it will be without fans or with less fans than usual. Will that benefit certain players? Milos Raonic, for example, is more methodical and less expressive on court, but Denis Shapovalov seems to feed off the energy of the crowd.

"The Australian Open is already planning on only allowing people from that region to come and it will be a less crowded situation. Shapovalov, obviously, feeds off the fans. I agee with you that Raonic will probably be able to handle any change like that ... [Petra] Kvitova, the two-time Wimbledon champion, has already said, 'I can't imagine playing without fans.' Roger Federer has said the same thing. So, that's another big discussion point, if these top players are wary not only in terms of safety, but if they don't think it will feel like a major event, a grand slam tournament, and if they decide not to play is it still a major? Does it still have the same heft? You can play without fans, I understand that, but it would certainly degrade the atmosphere.

"I understand that the TV rights are dictating the thinking at the USTA for the US Open. The French Open, let’s face it, they just put an incredible roof over [Court Philippe] Chatrier so they're trying to pay that thing off. They've already invested so much money in the 2020 French Open that they want to get some of it back ... Again, it's not a question of, 'Can they do it?' For me, it's should they do it? I'm elderly. I'm a grandmother. I've been through a lot and covered tennis for a long, long time and at this stage in my life safety has to come before anything."

.@rogerfederer and Petra Kvitova are some players not too keen on fan-less stadiums...https://t.co/sv6TtjDc3U

What impact do you think this long break will have on Bianca Andreescu, who actually hasn’t played since November due to injury? She must be so full of energy.

"Bianca will know just what to do with it. I'd love to think she'll show up fit and hungry. She clearly has shown she has a terrific tennis mind and great ambition. So, I'm glad she'll be in Charleston [for an invitational tournament later this month]. It's actually a very strong field that's kind of gotten cobbled together just in recent weeks. It's on clay and I know Bianca hasn't yet shown her best on clay, but there's no reason why Andreescu shouldn't be a great clay-court player. That kid is going to be good on anything. I'm a huge fan of Andreescu.

"I honestly think that this kind of break for the younger players like [Cori] 'Coco' Gauff, who's become an activist in the wake of the God-awful stuff that is happening all over my country right now, is positive. I think breaks are good because they give you a chance to give it all a very good think. Coco had spoken recently about how she'd gotten depressed and was missing out on her childhood and all of that and now she's been home for months and watching the rest of the world rather than focusing on her game. And Andreescu, because she's had so many injuries that have really held her back just in the last year, she too will have a very different perspective on how much this game means to her and what she really wants to do with her career. I worry about the older players, obviously, who are missing out on important time, but the younger players, for them, this could really be an important break if they're staying fit."

Andreescu became the first Canadian to win a singles grand slam and on the men's side we have a couple really promising young players in Shapovalov and Felix Auger-Aliassime, and Raonic is still a factor. Do you think we will see a Canadian man win a major soon and, if so, who?

"I have been impressed for the last several years with Felix. He's got great footwork and that's the first thing I look at with young players is their feet and not just the foot speed, but their footwork. Clearly, this kid has been very well-taught. Shapovalov is kind of a force of nature and his strokes are a little more elaborate. Obviously, big lefty take-backs and swings ... Those two have lit it up and they seem to be terrific friends so they're bringing each other along in those ways and supporting each other. So, if I had to pick who between them will win a major first, I would've said Felix a couple years ago, but I know he's struggled a bit, it seems, with his confidence. I'm hoping in the last several months he's been working on his serve, because his ball toss moves around a little too much and when he gets tight he tends to double fault in clumps. Hopefully he's worked on all that stuff. Look, I don't think either one of them is ready to win a major for a couple of years, but they both have a shot.

"And Milos has been hurt for so long, but this guy was a Wimbledon finalist. I saw him at Laver Cup last fall and he had missed a lot of time and he said what he knows about his game is his serve is always going to be there for him so that means even if he hasn't played a lot of matches, and certainly that’s going to be true of 2020, he can still take any set against almost anybody to a tiebreak and after that he'll see what happens. So, I'm not giving up with Milos either. He's got a very potent game."

We know that Raonic's best major is Wimbledon, but where will Shapovalov and Felix be the most dangerous?

"They're both probably best on hard courts. I've seen them play their very best on hard courts. I think they both really enjoy the hard-court tournaments during the summer season. They both really enjoy and feel the fans a lot. And, again, for somebody like Shapovalov, he knows that he's pleasing the crowd. Like, he lets us all know that not only is he enjoying this, but he knows he's making other people smile. So, yeah, I think for both of them their best surface will probably be hard courts, which means if they were to win majors it would be either in Melbourne or New York."

It starts with all of us. Thank you @FTiafoe pic.twitter.com/ABIeVRw9S2

You mentioned Gauff posting that video, Auger-Aliassime also posted a lengthy Instagram video revealing how his father, who is from Togo, experienced institutional racism in Quebec. What role can tennis play in dealing with what's happening right now?

"I also want to mention that Frances Tiafoe and his girlfriend put forward a video in the last day or two and there's a hashtag #RacquetsDownHandsUp and there's a bunch of players, including Serena Williams, with their hands up. It's pretty powerful.

"My two sports heroes are Arthur Ashe and Billie Jean King ... I think Arthur Ashe got himself arrested seven times protesting non-violently for human rights, civil rights, [against] Apartheid, patient rights. In one of his book he writes that one of the most powerful things you can do is get arrested for your cause, which is quintessential Arthur Ashe.

"This sport, obviously, we've had great champions ... tennis players are powerful, their voices are powerful. Martina Navratilova, I work with her at Tennis Chanel, a great friend of mine, and so often we're told that if we have social media platforms like Twitter or whatever, 'Don’t get political,' but all Martina tweets about is politics ... Tennis isn’t a team sport so every tennis player decides, on their own, outside of the locker room, what they want to stand for and what they want to fight for.

"One of the reasons why I have a hard time getting animated about the exhibition tennis that's going on and all the flashbacks and revisiting of matches is because there's so much that's happening right now in real time that is overwhelming in so many ways. I'm glad that tennis is speaking up, surely. And I’m glad that tennis is trying to come back this year, surely. But I don't have the great enthusiasm that somebody like me is supposed to be having. Again, I’m elderly. What can I tell you, I just want a better world for my four-month-old granddaughter than the one she's been born into. That's all."