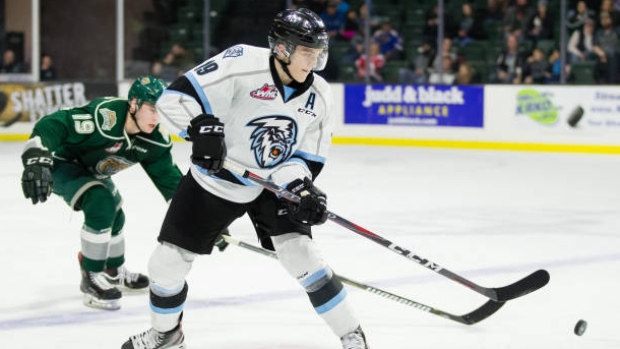 A freak accident during a training session left Peyton Krebs with a partially torn Achilles back in June 2019. That didn’t stop the Vegas Golden Knights from taking the Winnipeg Ice centre in the first round of the draft a couple weeks later, but it did keep Krebs sidelined for almost ​six months.

"Hockey is a big part of my life and being away from the game I learned a lot about myself and mental toughness," Krebs said. "It was a lot of stress, a lot of ups and downs but, at the end of the day, I look back and it went by pretty quickly."

It certainly helped that Krebs lived with veteran winger Mark Stone during the rehab process.

"I got to really create a relationship with Mark," said Krebs. "He brought over guys for dinner and it was awesome to be able to have that. Being there for five months, he​ really helped me and made me feel like part of the team even though I wasn’t."

“Stay strong, make them wonder why you’re still smiling” Thanks to my surgeon Ryan Martin for an amazing surgery and all the people who sent me a text! I will be back stronger than ever! #letsgetowork pic.twitter.com/eIXCnmyWYP

Krebs returned to game action in November and although he was invited to Canada's World Junior selection camp in December it was hard to challenge for a job with only a handful of games under his belt in the Western Hockey League. The 19-year-old from Okotoks, Alta., didn't make the cut, but finished the season strong with 60 points in 38 games.

And then, in this strange, pandemic-paused year, Krebs got to experience his first NHL training camp in Vegas and earned his way onto the playoff roster. The ensuing experience in the Edmonton bubble boosted his confidence and has him feeling ready to contribute to Team Canada at the upcoming World Juniors.

Krebs spoke to TSN via Zoom this week and revealed the important advice Stone gave him during training camp and described what it was like to have dinners with Marc-Andre Fleury during the playoffs. He also explained how he plans to bring some "extra spice" to Team Canada at the World Juniors.

Is there a moment or a conversation that stands out from the NHL bubble?

"We were in there for 68 days so there were a lot of conversations that went on. I got to know Deryk Engelland and Marc-Andre Fleury really well. I went to dinner with them almost every night and getting to hear stories from them and little bits and pieces of their career [and] learning from them, it’s amazing."

Fleury is known as quite a personality. What do you pick up on hanging out with him?

"Just an awesome guy. Each and every day he has a smile on his face. If anything you can learn the most from that, that each and every day it's a blessing to be able to play our game and just have a lot of fun doing it."

Before you reached the bubble, you were living with Stone again. What's that like?

"It's amazing! Hopefully he invites me back again, because it's awesome. Definitely a guy I look up to and have learned so much from ... He really treats you just like another guy and it’s pretty special. I can’t thank him enough."

What's the most interesting thing he's told you?

"I came to Vegas not knowing if I was going to make the bubble and he said to me, 'It's your first ever [NHL] training camp and you're selected [to be here] and the coaches and GM haven't even seen you play with NHL players so take that as a good compliment and go out there and work your bag off and have fun and as long as you do that good things will come.'"

How close do you feel like you are to making the jump and playing in the NHL?

"To be honest with you, I felt really good. I was confident out there. I definitely didn't feel out of place. Each and every day at practice and playing with those guys you start to realize ... you're not far from being that too. So, each and every day I kind of learned that I could for sure play here very soon and it was pretty exciting to finally see that."

What have you worked on since the season ended? Is there one thing you need to focus on to take the next step?

"My shot. The goalies are so good in the NHL. I'm a pass-first guy, but I definitely need to keep improving my shot ... and that's something that I've been working on since the day I left. Obviously, you can always work on your speed and strength in the corners, because that never hurts to have so definitely working on those things, but specifically my shot."

How do you work on your shot?

"It's just reps. As a kid, I shot pucks in the garage and I always just try and shoot for accuracy, but you also want to have some zip behind it. I feel like if you have some extra strength behind your shot then maybe it hits a blocker and goes in instead of just hitting the blocker ... when you can add a little more zip on it you can get those nice bounces."

What can you bring at the World Juniors? What role do you see for yourself on Team Canada?

"I can be a consistent guy in the lineup. I want to bring that extra spice, that energy in the lineup and be an impactful player. I think I can bring some good knowledge and be a fast guy who can bring the pace of the game up. So, I'm just going to try to do my part to play that 200-foot game and be a difference maker."

You're a natural centre, but Team Canada has a lot of centres so how comfortable would you feel on the wing?

"I'll play any position. I'll play D if they tell me (smile) ... a lot of systems have the first man back playing centre so in a lot of situations you're going to play wing as a centre anyway. For me, playing wing is about making sure I win my wall battles and getting that puck from the d-man in the corner and making sure I win that battle to get the puck out and from there it's pretty much the same."

You already have international experience on your resume. What do you remember most about the 2018 Hlinka Gretzky Cup win?

"It was awesome. There were a lot of ups and downs in that tournament that were pretty crazy. In those small tournaments a lot of things can go your way and a lot of things can't and you can work your hardest, but you might not get that one bounce. I think I learned a lot. I learned that in hockey you can be the best team and be the best on the ice, but if you don't get those bounces and that little bit of luck then you might not get [gold] so you just got to keep playing hard and one day, one game you're going to get that bounce and it’s going to go in for you."

Canada gets the job done early on in overtime to win the game and advance to the gold medal game! #HlinkaGretzkyCup pic.twitter.com/JRQS4PtcOe

What was your takeaway from finishing fourth at the 2019 under-18 World Championship when you served as Canada's captain? ​

"It was an honour [to be captain] with all those great players that we had. We had an unreal team. It was a lot of fun going overseas to Sweden and to see a new city, a new country. Obviously, we didn't get the result that we wanted. I learned that just because you're Team Canada doesn't mean you can win everything and you still have to put the work in and do everything right."

You have a big family with two brothers and a sister. What was the pandemic experience like for you guys?

"It was awesome. My whole family is here. My parents were going to the grocery store pretty much every week, every couple days actually, because we had four boys and a couple girls here so it was a busy household. We played a lot of card games, a lot of cross-country skiing when it was snowing and then we went mountain biking lots when it wasn't and got a lot of family time. As much as that was awesome, I'm excited to play hockey."

I saw your older sister, singer Maddison Krebs, came out with a song that was inspired by you and your brothers. What was it like to hear that?

"Actually I heard it in the bubble and let a few guys listen to it. I think [Nic] Hague, he almost cried when he listened to it so it was pretty awesome. And I almost did the same so, you know, it’s a special song and it really represents our childhood and my mom and dad, how special they are to all of us kids, and it's an awesome song. Really proud of my sister for doing that."