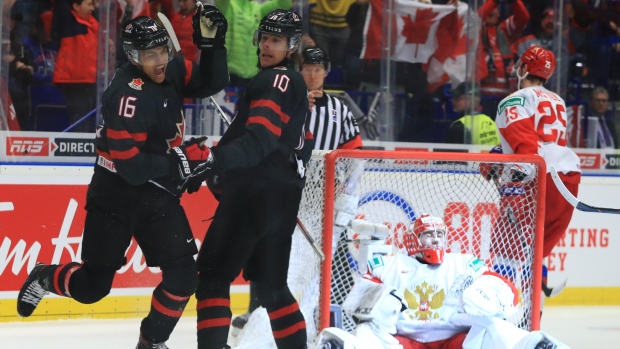 Akil Thomas has seen plenty of replays of his goal that won Team Canada the gold medal at the 2020 World Juniors.

"I'll get it sent to me or see it on Instagram or TikTok," the Los Angeles Kings prospect said. "It's crazy to think it's almost a year ago. I just kind of scroll through my phone photos and see the pictures and memories from that moment. It's pretty special and brings back a bunch of happiness." ​

The championship game between forever rivals Canada and Russia was tied late in the third period on Jan. 5 in front of a raucous crowd in Ostrava, Czech Republic. Thomas, a forward from Toronto, was an unlikely candidate to be the hero, having played sparingly during the tournament while picking up just one assist in the previous six games.

"I was praying I would get another shift," Thomas recalled. "What stands out to me is just being thankful for getting that shift and obviously I took my chance ... it's the best day of my life."

After the game Team Canada head coach Dale Hunter said he sensed Thomas was ready to do something special.

"I don't really peg myself as a goal scorer," Thomas acknowledges. "I'm more of a playmaker, but for some reason I just felt super cool about the day. Usually I get nervous before regular games and on that day, for some reason, I wasn't nervous at all. Everything was cool. I didn't really have to do my game-day routines that I usually do. I just had a good feeling about the game and I just felt super relaxed and felt that good things were going to happen. I couldn't really explain how or why I felt that way."

Thomas skated away with a gold medal and a life lesson.

"It actually taught me about believing and when things don't really look good for you to just keep believing in yourself," Thomas said. "I was used to playing a lot on every other team I played for, and at the tournament I had to take a role that most players wouldn't want to take, but I took it. The guys on our team, we were so close and loved each other so much, it made it so easy to do. I wanted to contribute to my team as much as I could and at the end of that tournament I wouldn't have changed anything."

And now a new chapter will be written in Canada's World Junior history. Thomas will be watching intently as some of his good friends look to defend the gold medal in the Edmonton bubble.

TSN caught up with the 20-year-old this week in Germany where he's been on loan with Eisbaren Berlin. Thomas provided some advice to the players who find themselves in depth roles and also offered insight on Team Canada's key players.

This year all the teams will have expanded 25-player rosters, because​ of the pandemic so there will be a 13th and 14th forward plus a seventh and eighth defenceman. What's your advice to the players who start in a depth role?

"First of all, I would just say to even make Team Canada is unbelievable. To be the 14th forward is, like, unbelievable. It's a great achievement and I kind of realized that as I looked back on the last year and how much attention we've gotten from winning. So, really take pride in even making the selection camp. It's a huge honour. To make the team and be a role player is something that's an adjustment for sure. Every player that goes to that camp is the top guy on their team and it's actually pretty hard. What's most important is forming a good team environment where the role players are willing to do that and believe in the betterment of the team. You have to believe that if I play the right way and I do my job then we have a good chance at winning. It's really just believing in yourself and knowing what you're going to the World Juniors to do. You're not going to play a lot and lose. You're going to do whatever you can and come back with a gold medal."

This year the tournament will be played in a bubble, so no family or friends are available for in-person support. Your family wasn't able to make the trip to the Czech Republic for the World Juniors last year. How did you deal with that?

"I might've been the only guy on the team who didn't have family there, but I wouldn't say it was tough at all. I knew everyone back home was watching, all my family was watching, so I felt like they were there even though they weren't. If anything maybe if they were there it would be a little more difficult for me to, you know, be on the bench for most of the game and just think, 'Maybe I'm disappointing my family, they came all this way.' But, no, I felt like they were right there with me. When there was family time a bunch of guys on my team would invite me over to their table and stuff, so I didn't feel alone at all. That's just the Hockey Canada culture and the team we had. Being with the guys for over a month, it seemed like I never felt alone, and I was in contact with my family the whole time."

I want to get your perspective on some of your teammates from last year who will be back. Sudbury Wolves centre Quinton Byfield, a fellow Kings prospect, finished last year's event as the 13th forward, but there are big expectations this year.

"His role being reduced put a little bit of salt in his mouth going into this year and maybe that's exactly what he needed to have an unreal tournament. Obviously, going second overall there's a lot of hype to it and he wants to show L.A. that he's ready for this year, and I think all the good energy's going in his favour. I think he's going to have an unbelievable tournament and I can't wait to watch him."

“Today, he was a man out there...I like his intensity.” - Andre Tourigny

Quinton Byfield gained 10 pounds of muscle during the pandemic pause and plans to use his 6-foot-4, 225 pound frame more at this year’s #WorldJuniors: https://t.co/aOWePkrJwS#TSNHockey pic.twitter.com/tg75l3HV7a

Erie Otters defenceman Jamie Drysdale was a young guy last year who also started in a depth role and then had to step up in the semifinals when Bowen Byram was out sick. What expectations do you have for Drysdale?

"He's definitely one of the bigger reasons why I'm excited to watch this year. Every time he has the puck on his stick he's going to make something creative and bad happen to the other team. I'm really looking forward to watching him go end to end and use his skating. I look at him as a little brother and I'm pretty proud of him having a good year and getting drafted high."

He's been paired up with Byram so far at camp and that has the makings of a pretty dangerous partnership. What's your take on Byram?

"Oh, he's a character. I've known him for a few years now. As soon as I met him we became pretty close. We still talk. I was talking to him the other day just checking in on how things were going and stuff and, of course, he was making me laugh. He's a great guy and really good player. I think he'll be a really good pro player as well. He just has the ability to do pretty much everything. He defends well. He's very offensive and he's physical. So, that D pairing is definitely scary for sure ... I don't see a better D pairing in that tournament."

What about Lethbridge centre Dylan Cozens? He actually played a pretty big role last year as a younger guy.

"Yeah, huge role. I wasn't sure he'd be on the team this year, because he definitely would've been a close call to make Buffalo. I think he's going to really take over the tournament and be one of the best players. Every name you bring up, it's just scary to think they'll all be on the same ice together. It's going to be unreal to watch."

With #WorldJuniors camp under way, @CraigJButton provides scouting reports on some of its key 🇨🇦 players.

How would you describe life in Berlin?

"It's been so different. You know, even stuff like driving is difficult. It's not the same traffic signs and stuff like that. Even buying groceries is hard, because everything's in German. For example, I thought I bought bacon one day and I cooked it and it was definitely not bacon. It was far from it. Just trying to navigate our way through town and trying to make it to practice without getting lost is definitely a hurdle. But it's been fun. It's been a really good experience for me, for sure, on the ice and off the ice, growing as a person."

What has been the biggest on-ice adjustment?

"The pro game is definitely different. European hockey and North American hockey are totally different as well. So, like, it's different in all aspects. It's a bigger ice, but it's faster so you have more space, but less time so you kind of have to make plays differently and it's harder to stand out and harder to dominate. You're playing with better players, but you're also playing against pro players who played in the NHL years ago ... so they have that experience and they have that pedigree so it's definitely difficult."