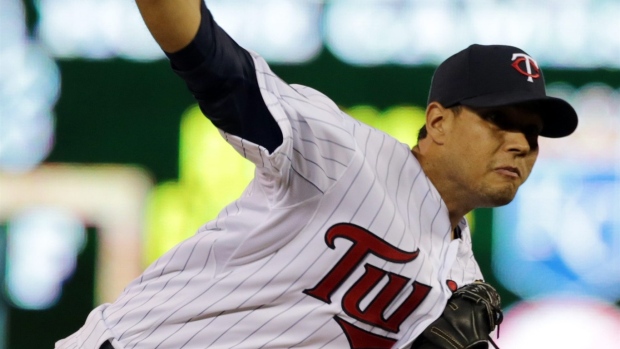 MINNEAPOLIS - Joe Mauer drove in two runs, including the go-ahead double in the eighth inning, to push the Minnesota Twins past the Chicago White Sox 4-2 Thursday night.

After rain delayed the first pitch by 2 hours and 6 minutes, the Twins stopped their season-high, five-game losing streak. Mauer, in the middle of the worst year of his six-time All-Star career, also hit a tying single in the third. After 18 games without an RBI, Mauer has three in three days.

With Jake Petricka (0-2) pitching with runners at the corners with no outs, Mauer hooked a drive down the left-field line. Kurt Suzuki tacked on a sacrifice fly.

Glen Perkins tossed a scoreless ninth for his 18th save in 20 tries, after a bad back kept him from pitching Wednesday in Boston.

Casey Fien (4-4), who subbed as the closer Wednesday and gave up two homers in the 10th inning in a 2-1 loss to the Red Sox, returned to the eighth-inning role and earned the victory that really belonged to Yohan Pino.

Josh Willingham's home run in the second, the first time in 10 starts that Jose Quintana surrendered a long ball, gave Pino a brief lead. But after a walk by Gordon Beckham loaded the bases in the third, Connor Gillaspie smacked a two-run single into centre field.

Over the last nine games, Twins starters have a 2.41 ERA. Pino struck out seven and allowed five hits and one walk.

He signed with the Twins more than 10 years ago, but after reaching Double-A in July 2007 he bounced up and down between the top two levels of the minors over the following six seasons. He pitched for four teams each in Double-A and Triple-A.

Traded to Cleveland in August 2009 for Carl Pavano, Pino played for three organizations until rejoining the Twins this year. When the Twins sent Sam Deduno to the bullpen, Pino was the pick after posting a 9-1 record and 1.92 ERA with 61 strikeouts in 61 innings for Triple-A Rochester. Two of his seven starts were shutouts.

Having gained valuable experience in the Venezuelan Winter League, Pino has become good enough at changing speeds and throwing breaking balls for strikes to make up for an average-at-best fastball. Given the length of his journey and the positive impression he has made on the team, the Twins were extra excited to see him take the mound.

Pino struck out Jose Abreu the first two times he faced the rookie slugger. Abreu became the third-fastest to reach 20 home runs when he went deep Wednesday against San Francisco in his 58th career game.

Quintana has had another solid season for the White Sox, his third, but a lack of assistance has persisted. His average run support, 4.11 per nine innings, is the second-lowest in the American League since his debut in 2012. Winless in four starts this month, Quintana struck out six in seven innings while allowing six hits and a walk.

Home plate umpire Mike Muchlinski took a hard foul tip off the bottom of his mask in the fourth. He finished the inning after being checked on by Twins trainer Dave Pruemer but was replaced for the fifth inning by crew chief Mark Wegner. A three-man group was used for the rest of the game.

NOTES: Willingham has six homers in 24 games since returning from his rehab assignment for a broken wrist, but he entered the night in a 1-for-19 slide. ... The Twins will send Ricky Nolasco (4-5, 5.66 ERA) to the mound on Friday, and Hector Noesi (2-5, 5.37 ERA) will pitch for the White Sox. ... The White Sox announced their June 10 rainout against Detroit will be made up as part of a day-night doubleheader on Aug. 30.