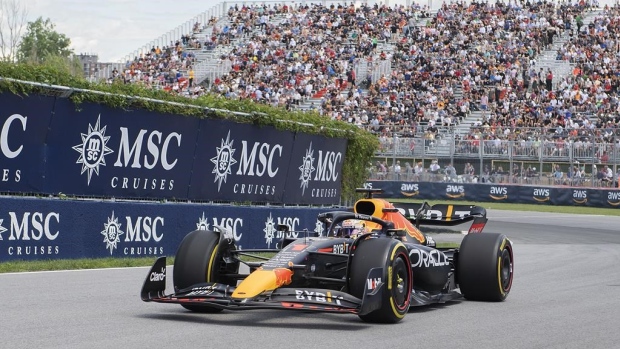 MONTREAL — Red Bull's Max Verstappen laid down the fastest lap times in both practice sessions for the Canadian Grand Prix on Friday, as he aims to build on his lead in the Formula One season standings.

Verstappen covered the Circuit Gilles Villeneuve track with a lap time of one minute 14.127 seconds in the second session, slightly faster than the 1:15.158 he'd posted to top the drivers in the first practice session.

With dark clouds overhead, drivers raced to get decent laps done before bad weather rolled in. When told rain was expected 10 minutes after the end of the session, Verstappen said "that would be lovely."

Ferrari had two drivers in the top three in the late session with Charles Leclerc taking second in 1:14.208 and teammate Carlos Sainz taking third (1:14.352).

Seven-time world champion Lewis Hamilton was 13th in the second session, five places worse than he'd finished earlier in the day, and well behind teammate George Russell, who was seventh.

"This car's undrivable, man," Hamilton said, before heading to the pits.

Mercedes team leader Toto Wolff said between practice sessions that they were tinkering with the setup of both cars, particularly Hamilton's. They'll head back to the drawing board before Saturday's qualifying.

Drivers hadn't been on Circuit Gilles Villeneuve in three years. The weekend marks Formula One's return to Montreal after COVID-19 forced cancellation of the Canadian stop in both 2020 and 2021.