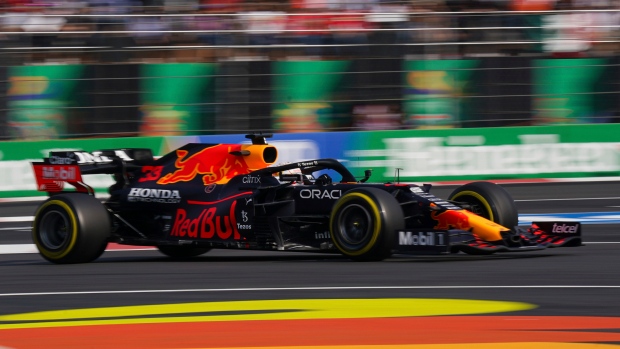 MEXICO CITY (AP) — The early laps in the dust of Mexico City belonged to Mercedes. By late afternoon, Red Bull was off and running again.

Formula One season championship leader Max Verstappen posted the fastest time of Friday's second practice at the Mexican Grand Prix. His Red Bull was more than half a second ahead of title rival Lewis Hamilton of Mercedes.

Hamilton even trailed Mercedes teammate Valtteri Bottas, who was more than 0.4 seconds behind Verstappen in the high altitude and thin air of Mexico City's Autodromo Hermanos Rodriguez.

Verstappen's teammate Sergio Perez was on Hamilton's rear wheel in fourth after recovering from a crash in Friday's first practice.

Verstappen leads Hamilton by 12 points heading into the final five races. The 24-year-old Dutchman is trying to win his first title. Hamilton, 36, is chasing a record-breaking eighth.

Red Bull found the speed to make a resounding recovery after Bottas and Hamilton were quickest in first practice, a session marked by clouds of dust on a track that hasn't been used in two years. The tricky conditions made traction difficult and sent several car spinning.

That included Perez, the national favorite, who put his car into the wall just a few laps into the opening session. Red Bull had to park his car for 25 minutes of the hour-long session for repairs.

Red Bull is heavily favored at the track. Verstappen won in Mexico City in 2017 and 2018. He was dominant through practice and qualifying again in 2019, but a starting grid penalty and a second lap tire puncture ruined his race and Hamilton won.

“The margins are going to be very close in qualifying to the Mercedes but hopefully we can lock out that front row,” Perez said. “I don’t think it has been a representative day in terms of predicting qualifying, tomorrow everything will be even closer.”

Hamilton has conceded it will be very difficult for Mercedes to match Red Bull's race speed on Sunday. Unlike the previous race at the U.S. Grand Prix when Verstappen flipped Hamilton the middle finger and called him a “stupid idiot” after their cars nearly touched in practice, the drivers steered clear of each other in Mexico City.

Red Bull Team Principal Christian Horner refused to rule out a potential team owner for Perez to forfeit a win to Verstappen if it was needed to aid Verstappen's title hopes.

It would mean Perez giving up a victory at his home race.

“It would depend where our opponents (Mercedes) are. You can’t rule it out, you can’t rule it in,” Horner said. “Our preference would be to see if Checo were in that position for him to win his home race. There is no bigger result for any home driver.

"But as a team, we have to keep our eye on both of these championships and know what’s at stake."

Perez comes to Mexico City at the top of his career with a victory and three more podium finishes. He finished third in the previous two races and has never had three consecutive top-three finishes in his career.

Horner noted Red Bull trails Mercedes by only 23 points in the team constructors championship, where the season title is worth millions of dollars to the winning team.

“Formula One isn’t just about the drivers,” Horner said. “The drivers are one element of the team, they’re contractors that contract for the team. The constructor’s championship has equal or more weight to it. Perhaps not the prestige, but that’s where the money is paid out.