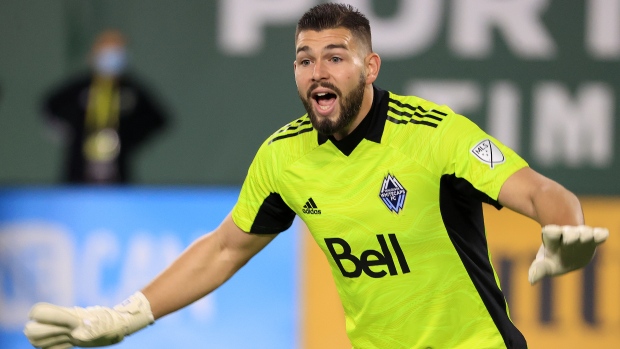 Recently traded from the Vancouver Whitecaps to Los Angeles FC, Maxime Crepeau is still on the move.

Currently in camp in Florida with Canada, the 27-year-old goalkeeper from Candiac, Que., is headed to Honduras and El Salvador with a game against the U.S. in Hamilton in between as the Canadian men play three crucial World Cup qualifiers in a week.

The reasons behind the move are unclear. Vancouver CEO Axel Schuster cited a "very special personal situation'' but did not elaborate. Crepeau was not in Vancouver when the club opened training camp with the team saying he was away for "personal reasons.''

"He had to leave Vancouver to solve this problem," Schuster said when the trade was announced.

In a statement when the deal was announced, Crepeau called it "personally the hardest decision I've had to make in my professional career."

Crepeau is still keeping his cards close to his chest when it comes to the reason for the move.

"As you can imagine, a lot of people are asking questions but basically it's personal reasons. I will keep it that short, to be fair … My wife, myself and our daughter are healthy, that's No. 1. Because we've received a lot of messages. We're all healthy," he said in an interview from the Canadian camp.

And he corrected reports that cited "family reasons."

"It's not about the family part … At the end of the day it's really a personal matter and we're really happy to be in Los Angeles."

The 40th-ranked Canadian men take on No. 76 Honduras in San Pedro Sula on Thursday before flying home to host the 11th-ranked Americans on Sunday at Hamilton's Tim Hortons Field. Then it's off to San Salvador to face No. 70 El Salvador on Feb. 2.

"We expect a tough week but we know the reality," he added. "We know that everybody is going to be needed on that roster … We're ready for that as a group, as a unit."

He says it helps that many of the Canadian players have grown up playing together.

"Over the years, there's that special bond that links up everybody. There's a brotherhood that's super-strong in the group that will not disappear over time. It's there for ever."

Come March, the top three teams will book their ticket to Qatar 2022 with the fourth-place side taking on an Oceania country in an intercontinental playoff to see who joins them.

After this window, John Herdman's team will wrap up qualifying play in late March with a home game against Jamaica sandwiched around away matches in Costa Rica and Panama

Crepeau, who has won 14 caps for Canada, is one of three 'keepers in camp — along with veteran Milan Borjan (Red Star Belgrade, Serbia) and Jayson Leutwiler (Oldham Athletic, England).

Crepeau has yet to join LAFC. He is looking forward to flying to California as soon as his international duties are done.

"It's a great organization," he said. "They're really looking forward to their fifth season in the league with a clear understanding of culture and winning."

Crepeau, who says he and his wife are still in house-hunting mode in L.A., says he won't forget his time in Vancouver.

Crepeau, who missed the majority of the 2021 season due to a fractured thumb suffered during the MLS Is Back Tournament, made 57 regular-season starts with Vancouver with another three in 2017 playing for Montreal.

Pablo Sisniega and Jamal Blackman also saw action in the LAFC goal last season. Sisniega was out of contract at the end of the year and the club declined Blackman's option.

Dutch 'keeper Kenneth Vermeer left the club last April while Greg Ranjitsingh, an MLS pool 'keeper who is now with Toronto FC, joined the roster in September after Sisniega underwent surgery to repair a nasal fracture

Crepeau was 10-7-10 with Vancouver last season, recording six shutouts and a 1.15 goals-against average. He was named the Whitecaps' player of the year, as he was in 2019.

"We consider Maxime to be one of the top goalkeepers in MLS," LAFC co-president and GM John Thorrington said at the time of the trade." Like us, we know he is committed to winning, and his leadership and experience will contribute to our success on the field.”

This report by The Canadian Press was first published Jan. 25, 2022.