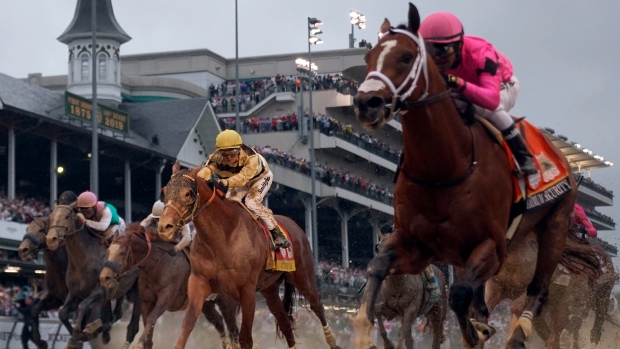 LOUISVILLE, Ky. — Owner Gary West announced Monday Maximum Security will not be in the field for the Preakness on May 18 following his horse's disqualification from the Kentucky Derby.

"No. We are not going to run The Preakness," West told NBC's Today. "There's no Triple Crown on the line for us, and no reason to run a horse back in two weeks when you don't have to."

West also said he would file an official appeal on Monday, two days after his horse was disqualified and Country House was named Kentucky Derby winner.

West said Sunday that the appeals process could extend well beyond the upcoming race at Pimlico in Baltimore. And with Kentucky racing stewards’ ruling that Maximum Security interfered with other horses that led to his disqualification, there might not be a point to racing the colt in the Triple Crown series’ middle jewel.

“When you’re not going for the Triple Crown, sometimes it doesn’t make sense to wheel the horse back in two weeks,” West said in a phone interview with The Associated Press.

“If there’s going to be an appeal it will almost certainly be before the Preakness, but appeals historically take some time to sort out. Win, lose or draw, we’re not going to know the outcome of that until probably months, if not years, down the road.”

Maximum Security was first to finish Saturday’s muddy Derby before becoming the marquee race’s first winner to be disqualified for interference . Stewards elevated runner-up Country House, a 65-1 long shot, to the winner’s circle after determining that Maximum Security impeded his path and two others’ exiting the final turn. Maximum Security was ultimately placed 17th of 19 horses after starting as the 9-2 second betting choice, ending his four-race winning streak.

Stewards cited a section of the rule that calls for disqualification if “a leading horse or any other horse in a race swerves or is ridden to either side so as to interfere with, intimidate, or impede any other horse or jockey.”

Chief steward Barbara Borden said in a news conference that she and two other stewards interviewed riders and studied video replays of the incident during a 22-minute review after the finish. The stewards did not take questions from reporters.

West said the earliest he could see the stewards’ video evidence would be Thursday, which could determine if he files an appeal in a process he was still trying to understand.

“We wanted to have the stewards explain to us what they saw and show us on their video the pictures of exactly what they saw, and they refused to allow us to do that,” he said.

“That was really pretty bush league, because there is no rule that they can’t show the film to the owner and trainer that got disqualified for the first time in the history of the Kentucky Derby other than they aren’t working today, or Monday, or Tuesday or Wednesday.”

The only other disqualification in the Derby occurred long after the race in 1968. First-place finisher Dancer’s Image tested positive for a prohibited medication, and Kentucky state racing officials ordered the purse money to be redistributed. Forward Pass got the winner’s share. A subsequent court challenge upheld the stewards’ decision.

“The Kentucky Derby decision was not a good one,” Trump tweeted Sunday. “It was a rough and tumble race on a wet and sloppy track, actually, a beautiful thing to watch.

“Only in these days of political correctness could such an overturn occur. The best horse did NOT win the Kentucky Derby — not even close!”

The Derby finish will be debated for some time, and that’s not good for the beleaguered sport.

The lead-up to Triple Crown season and the week at Churchill Downs was not what horse racing officials had hoped for. And now, the focus during the run-up to the Preakness will be on what’s happening off the track.

A scary spill for a filly and jockey opened Friday’s Kentucky Oaks for fillies, and winner Serengeti Empress won her first start since pulling up in her previous race because of external bleeding. That followed medication and safety reforms by the industry after the deaths of 23 horses over three months at Santa Anita.

Now racing moves to the Preakness and Pimlico, where nearly 6,700 seats at the dilapidated track have been deemed unsafe and will be unavailable. The Canada-based Stronach Group that owns Pimlico and Santa Anita has also clashed with Baltimore officials over concerns that ownership may move the Preakness to Laurel Race Course.

And the best story on the track may not materialize: a Maximum Security-Country House rematch.

Country House trainer Bill Mott said the colt was in good shape after the Derby but remained noncommittal about the 1 1/8-mile Preakness, which is shorter than the Derby. It would mark his fourth race in eight weeks if he runs.

West also declared Maximum Security fine but will monitor him the next few days.

“The revenge motive doesn’t even enter into my mind,” West said. “The horse proved he was the best horse (Saturday) by far. If he’s not 100%, we would not even think about taking this horse to the Preakness and then we won’t know that for a few days.”