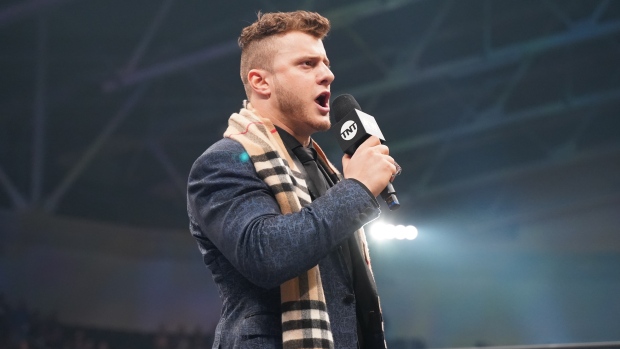 Conventional wisdom in professional wrestling has long dictated that the most successful gimmicks are those that are the result of the person performing them taking their own personalities and turning them up to 11.

Sure, Mark Calaway became an all-time great by spending 30 years as an undead zombie and Glenn Jacobs found lasting success as his pyromaniac younger brother, but for every Undertaker and Kane, there are dozens of failed gimmicks that didn’t work because they were simply too unbelievable in a world that asks its viewers to suspend their disbelief on a regular basis.

If not for their infamy, the likes of Mantaur (a Minotaur in the mid-‘90s World Wrestling Federation), Phantasio (a magician who would steal his opponent’s boxer shorts…no, really) and Duke “The Dumpster” Droese (a garbage man) wouldn’t be remembered at all.

In most cases, for a gimmick to truly resonate, it needs to be steeped in reality. Ric Flair, Steve Austin and Dwayne Johnson are icons of the business because they turned who they were outside of the ring into “The Nature Boy,” “Stone Cold” and “The Rock,” respectively, simply by amplifying what was already there.

Maxwell Jacob Friedman is a little bit different, though. The All Elite Wrestling star is far from the first “wealthy, arrogant jerk” in pro wrestling, but at only 25, he might already be its best. There is no daylight between the Burberry scarf-wearing MJF and Max Friedman. What you see on TV is what you get everywhere else. Either nobody in wrestling right now lives his gimmick more than MJF or this dastardly heel is truly Max Friedman.

“I think there’s a pure evil to Max that wrestling hasn’t seen in some time,” Cody Rhodes told TSN.ca of MJF in 2020. “There are good guys and there are bad guys in wrestling, but I think Max is kind of uniquely positioned where the only people who might know who he really is are his family in Long Island. They may be the only people who know who that individual really is, because from the moment he steps out of the house to when he puts his foot on the plane to when he leaves, his commitment to the persona of MJF is present, and I think that’s entertaining. Bad guys can be entertaining.”

MJF is undoubtedly entertaining, and he proved that throughout 2020. He main-evented his first pay-per-view. The Wrestling Observer Newsletter readers voted him as the “Most Charismatic” performer of the year. The New York Times named his “Le Dinner Debonair” musical segment alongside Chris Jericho during Dynamite last October as one of its “Best Performances of 2020.”

MJF is a lot things, but he insists that one of them isn’t a gimmick.

For MJF, a gimmick is a sign of weakness.

“I go to work and I watch these guys – whether they’re putting on a mask, whether they’re putting on gear to make themselves feel like superheroes because realistically, in their minds, they are, let’s face it, they’re feeble,” Friedman said. “They’re nerdy. You know, they probably were in high school and they probably weren’t the most popular kids in school. Realistically, I’ve always been the guy. I was the guy on the gridiron, I was the guy in school, and I’ve been the guy since I was practically conceived. MJF isn’t something I put on and wear and walk through the curtain. MJF is a lifestyle. MJF is my freakin’ name, for crying out loud. So it is what it is, man. If people can’t handle that, they can’t handle that.”

A product of Brian Myers and Pat Buck’s Create A Pro Wrestling Academy in Nassau County, NY, Friedman quickly made a name for himself in Combat Zone Wrestling and Major League Wrestling, but broke out nationally upon his arrival in AEW and in 2020, he main evented September's All Out pay-per-view in a title match against Jon Moxley.

While many in AEW first rose to fame in other promotions like WWE, New Japan Pro-Wrestling or Ring of Honor, Friedman feels very much like the promotion’s first true homegrown superstar.

The bedrock of his act is his mic work. There are few performers in wrestling today who can match wits with the silver-tongued Friedman. Quick with a cutting barb and unafraid to cross the line, MJF uses the microphone like a surgeon uses a scalpel, but sometimes it’s hard to hear him over the cacophony of boos from the audience.

“Here’s a fact: Every time I walk through that curtain, I elicit the loudest reaction out of everybody on our roster,” Friedman said. “Is it boos? Absolutely. Sure, I can’t deny that. People don’t like me. That’s fine. I don’t care whether they like me or not. All I care about is the bottom line. Am I eliciting the largest emotional reaction out of everybody else in my sport? Right now, the answer is yes.”

As for when Friedman realized that he had this outsized gift of gab...well, he’s not sure.

“I don’t know – when did God know he wanted to create life?” MJF said. “It’s been like this since I was born, pal. I’ve been able to talk my way into any situation I want to be in, and I’ve been able to talk my way out of any situation I don’t want to be in. Some in professional wrestling, in my sport, they have a problem with me. They call me a manipulator. And you know what? To be perfectly frank, I don’t know why manipulation has such a bad connotation to it. You can manipulate somebody into having a great day. You can manipulate somebody into being a better parent, to stop smoking, to stop drinking. So you know what? Yes, I’m a master manipulator. I do what I want, I get what I want when I want to, and I’m damn proud of it. I’m the greatest promo in the history of professional wrestling and if anybody disagrees with me, they either are A. living under a rock or B. have never seen me talk before.”

The object of most of Friedman’s verbal jabs of late has been his former mentor, Jericho. Once a member of Jericho’s Inner Circle faction, MJF recently revealed his long con since joining the group last November. Friedman’s plan was to tear the group down from the inside through the ostracizing of Sammy Guevara and planting seeds of mistrust throughout the other members.

While doing this, Friedman formed his own faction in secret: The Pinnacle, unveiling Wardlow, Shawn Spears, FTR (Dax Harwood and Cash Wheeler) and Tully Blanchard to the rest of AEW on the Mar. 9 edition of Dynamite as they laid waste to Jericho and company.

You can catch MJF's The Pinnacle in six-man tag team action when Shawn Spears and FTR take on the team of Dante Martin and The Varsity Blonds on AEW Dynamite on Wednesday night at 8pm et/5pm pt on TSN5, the TSN app, streaming on TSN Direct and on TSN.ca.

“I did get to pick that guy’s brain and, as much as I dislike that bastard, let me tell you something – he definitely understands how to lead a faction, which is one of the main reasons why I wanted to get into that group and get into his inner circle,” Friedman said. “I wanted to learn from him, whilst also destroying his group, making sure that my group would be top honcho once I unveiled them to the world. Chris Jericho has an incredible professional wrestling mind, but unfortunately, he wasn’t smart enough to catch me. He did not catch the fox in the henhouse and that’s exactly what I am – I’m crazy like a fox in the best way possible.”

Now at helm of his own faction, Friedman is effusive in praise of its membership and is particularly excited to work alongside the legendary Blanchard.

As for what’s next for Friedman, he maintains that he doesn’t have a dream opponent – all he’s after is a championship.

“I never really like that phrase, ‘dream opponent,’” MJF said. “It never really made much sense to me because, realistically, the reason I’m here is to win the world championship. So I’ll tell you what – my dream opponent is whoever is wearing that title when I am the No. 1 contender. I don’t care if it’s Kenny Omega, I don’t care if it’s Jon Moxley, I don’t care if it's Cody Rh- oh, it can’t be Cody Rhodes. I took that away from him (when he defeated Rhodes at Revolution in 2020 in a match with a stipulation that Rhodes could never challenge for the world title if he lost). I don’t care who it is. At the end of the day, my only goal in professional wrestling is to prove to the world that I am the best professional wrestler in the world and the only way to do that is by being the AEW world champion. And I can promise you right now – mark my words – I will be the AEW world champion, and I will have a reign that makes the likes of Bruno Sammartino blush and I cannot wait.”

If 2020 was Friedman’s coming-out party, he already knows what will make 2021 an even bigger triumph.

“A successful 2021 looks like me completely obliterating Chris Jericho and the Inner Circle and it looks like me proving to the world that The Pinnacle is the best faction in professional wrestling while taking all the gold we possibly can hold,” MJF said.

After thanking Friedman for his time and wishing him the best of luck in 2021, he had these parting words:

“Yeah, whatever,” MJF said before abruptly hanging up.