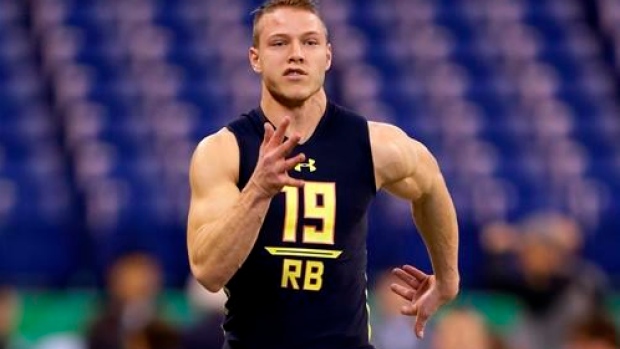 INDIANAPOLIS — Christian McCaffrey more than made up for a disappointing performance on the bench press at the NFL combine on Friday when he outshone fellow running backs Leonard Fournette and Dalvin Cook along with most of the wide receivers.

McCaffrey had said a day earlier that he would focus only on the running back drills and add routes to his pro day back at Stanford later this month. But he worked with both groups Friday.

NFL Network analyst Charlie Casserly called McCaffrey the best performer in the running back drills and later tweeted, "They had Christian McCaffrey work out as a WR and he looked like a 1st rd pick there too."

Topping off his dominant day, McCaffrey posted a time of 6.57 seconds in the 3-cone drill, which was the second-fastest by a running back at the combine since 2003.

McCaffrey did well in the broad jump, too, at a respectable 10 feet, 1 inch.

McCaffrey is projected as a running back, a slot receiver and a kick and punt returner in the NFL.

"He's a dynamic player that can do it all," Broncos general manager John Elway said. "Wherever he goes, he's a guy that's going to have an impact immediately wherever."

McCaffrey said he's not just a running back who can dabble in trick or specialty plays.

"Something I really pride myself on is not just being a running back that can catch the ball but if I move out to the slot, I become a receiver," McCaffrey said Thursday. "I really try to pride myself on route running, catching and being able to be a mismatch anywhere on the field."

"Wherever they put me," he added, "I'll do anything a team needs me to do."

Just like in college, where he scored on rushes, receptions, kick returns and punt returns.

On Thursday, McCaffrey said, "I won't run routes here. I'll do a lot of that stuff at my pro day. I'll do the running back stuff, everything single drill here."

He changed his mind after dominating the other elite running backs and only added to his terrific performance by showing off his skills as a wide receiver, too.