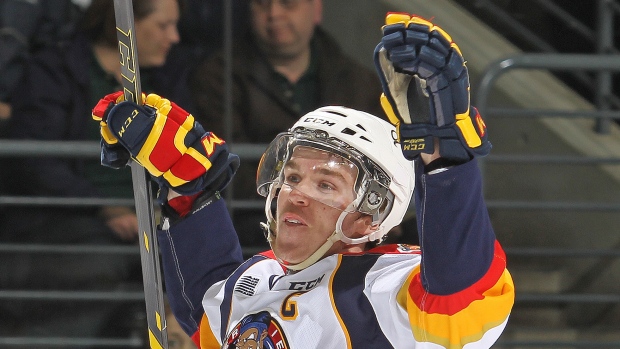 McDavid, a virtual lock to be selected first overall at next month's NHL Entry Draft, was third in the OHL with 120 points (44 goals, 76 assists) in just 47 games. The 18-year-old from Newmarket, Ont., also had an OHL-best rating of plus-60 during the regular season.

"It's a very special day to be recognized as the league's MVP," he said on a conference call. "It means the world to me."

McDavid finished well ahead of Barrie Colts forward Joseph Blandisi in the media voting. He will be the OHL's nominee for the Canadian Hockey League player of the year award at this month's CHL Awards ceremony in Quebec City.

McDavid helped the Otters win 50 games for the second straight season and earn their first Midwest Division title since 2002. He's the third player in franchise history to receive the honour after Connor Brown (2014) and Brad Boyes (2001, '02)

Considered a generational talent, McDavid started the regular season on a tear with a whopping 51 points in 18 games. He broke a bone in his right hand Nov. 12 and was sidelined for over a month before returning to action at the world junior hockey championship, helping the Canadian team win gold in Toronto.

When he returned to the Otters, McDavid picked up where he left off. He had a 27-game point streak come to an end in mid-March, recording 26 goals and 32 assists over the stretch.

Erie finished the regular season with a 50-14-2-2 record. The Otters dropped just three games over the first three playoff rounds but trail the Oshawa Generals two games to one entering Wednesday's Game 4 in the OHL final at Erie.

"It's been a great year and it's been a lot to handle," McDavid said. "Obviously you get off to a start that you would hope (for) in a draft year. I thought I was playing some of the best hockey I've played in a long time and breaking your hand isn't exactly how you dream of going about your draft year.

"But I got through that and obviously winning the world juniors was so special. Now to be a part of this group of guys and going after something that everyone has dreamed about for so long — it has been a great year."

McDavid added he was proud to serve as team captain this year and is a stronger leader because of it.

"He's really not 18 — he's beyond it," said Otters general manager Sherry Bassin. "The players have such respect for him and for what he's about."

Once the junior post-season concludes, McDavid will remain in the spotlight ahead of the June 26-27 NHL draft in Sunrise, Fla. The Edmonton Oilers own the first overall pick after winning the draft lottery last month.

"That draft lottery night was a pretty crazy night," McDavid said. "It was certainly exciting and it was a lot to take in. Edmonton is a great place and it's got such a great hockey history.

"You look at the names that have been through there, it's unbelievable. So just to maybe be a part of it if I'm fortunate enough to play there, then obviously that would be a tremendous honour."

The OHL award was named in honour of Albert (Red) Tilson, who was killed in action in Europe during the Second World War. In 1942-'43, Tilson had 19 goals and 38 assists for 57 points in 22 games with the Oshawa Generals.