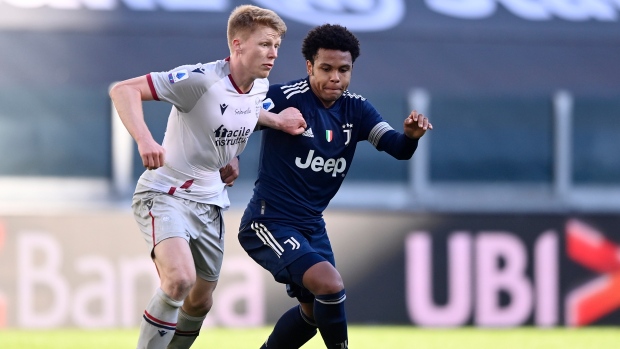 MILAN — Weston McKennie scored to help Juventus beat Bologna 2-0 in Serie A on Sunday and bounce back from its demoralizing loss to title rival Inter Milan.

The American headed in Juve’s second goal, in the 71st minute, after Arthur had given the Bianconeri the lead in the first half.

Juventus moved within seven points of Italian league leader AC Milan, which was beaten 3-0 at home by Atalanta on Saturday. Second-place Inter Milan also dropped points with a 0-0 draw at Udinese. Nine-time defending champion Juventus has a match in hand.

Juventus is fourth, level on points with fifth-place Atalanta.

“It’s very important for us, we watched yesterday how both Milan clubs dropped points,” McKennie said. “We are a game down also. We still have to play both of them here in Turin.

“It was important that we got the win today, three points closer. I think it will be a fight 'till the end of the season and we’ll see who wants it more.”

Juventus had lost 2-0 at Inter last week but boosted morale by beating Napoli by the same scoreline on Wednesday to lift the Italian Super Cup.

Andrea Pirlo’s side needed a stroke of luck to take the lead against Bologna in Turin, with Arthur’s somewhat hopeful shot deflecting into the bottom right corner in the 15th minute.

It was Arthur’s first goal for Juventus since joining from Barcelona in June.

Juventus had chances to double its lead, notably when Bologna goalkeeper Lukasz Skorupski performed a stunning double save to keep out first Cristiano Ronaldo’s effort and then Federico Bernardeschi’s attempt on the rebound.

It took Juventus until the 71st to get the second when McKennie headed in a corner for his fourth goal for the Bianconeri.

McKennie almost doubled his tally immediately but Skorupski pulled off another spectacular save to keep out the American youngster’s close-range volley after great work from Ronaldo.

Hirving Lozano scored Napoli’s fastest goal in Serie A and also the third-fastest ever in the Italian top division. But Napoli went on to lose 3-1 at Hellas Verona.

Lozano fired Napoli in front after just 8.9 seconds, according to statistics supplier Opta, which said he was just behind Rafael Leão and Paolo Poggi.

Leão had broken Poggi’s 19-year-old record when he scored for AC Milan in a 2-1 win against Sassuolo last month.

Federico Dimarco had been partly at fault for Lozano’s opener but the Verona defender atoned for his error by starting and finishing the move for the equalizer in the 34th.

Antonín Barák netted what was to prove the winner for Verona in the 62nd, following an inspired pass from Mattia Zaccagni, who then scored Verona's third.

Sixth-place Napoli is level on points with seventh-place Lazio, which beat visiting Sassuolo 2-1. Sergej Milinkovic-Savic and Ciro Immobile scored for Lazio, which won its fourth straight.

Parma remained a point below Cagliari following a 2-0 loss at home to Sampdoria, which got goals from Maya Yoshida and Keita Baldé Diao.