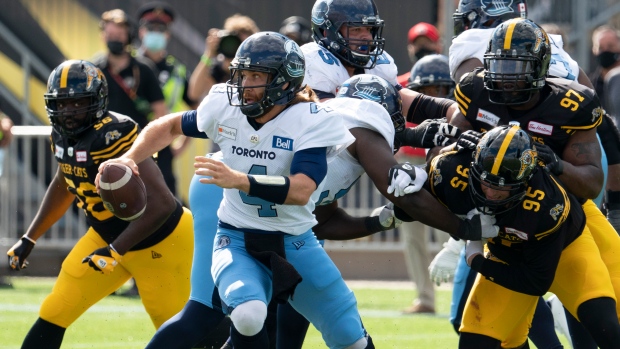 It looks like McLeod Bethel-Thompson is all systems go for the Eastern Final.

Mcleod Bethel Thompson tested negative this morning, and was on the field at 10:35am. MBT will start the East final @TSN_Edge @CFLonTSN @CFL

TSN's Matthew Scianitti tweeted Sunday morning that Bethel-Thompson tested negative for COVID-19 Sunday morning and was on the field just after 10:30 a.m. ET preparing to start against the Hamilton Tiger-Cats.

On Friday, the Canadian Football League ruled that Bethel-Thompson and three other Argos — Dexter McCoil, Charleston Hughes, Llevi Noel and Jeff Richards — that attended a Toronto Raptors game against the Milwaukee Bucks Thursday night would be eligible to play if they quarantined for two days and two nights and continued to test negative until game time Sunday.

Before Friday's ruling, CFL COVID-19 policy dictated that players who attend large indoor gatherings, including Raptors games, would be subject to a four-day quarantine. This would have originally ruled out all four players from Sunday's game.