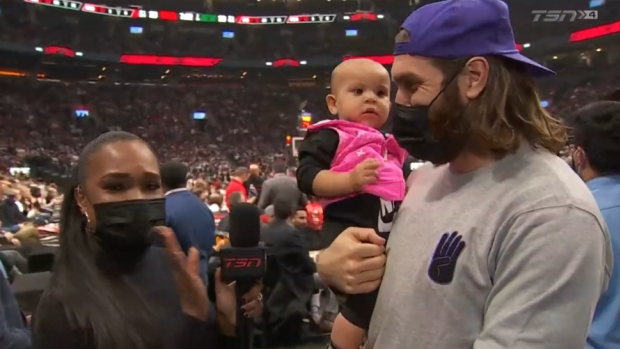 It appears that McLeod Bethel-Thompson taking in a Toronto Raptors game on Thursday night might come at great cost to the Toronto Argonauts.

TSN Football Insider Dave Naylor reports the Boatmen quarterback was sent home from team practice on Friday because his attendance at the 97-93 win over the Milwaukee Bucks was a violation of the Canadian Football League's COVID protocol and Bethel-Thompson must now quarantine for four days.

Hearing @TorontoArgos QB MacLeod Bethel-Thompson has been sent home and is being held out of practice today because of attending the @Raptors game at his team’s request. It’s a violation of CFL Covid protocol, which states he must now quarantine 4 days. Game day is Sunday.#CFL

A four-day quarantine would rule Bethel-Thompson out of Sunday's East Division Final when the Argos host the Hamilton Tiger-Cats at BMO Field with a trip to the Grey Cup on the line.

Bethel-Thompson, 33, attended the game at Scotiabank Arena at the encouragement of the team and Maple Leaf Sports Entertainment, the ownership group of both the Argos and Raptors.

Ticats receiver/returner Brandon Banks tweeted on Friday morning that he also wanted to attend a Raptors game at some point this season, but was told by the league that he couldn't.

Wow when I tried to go to raptors game the @cfl told me I couldn’t go ! I ain’t snitching but shit fishy ! #Protocol #tier1 https://t.co/iVuowKAPI1

"Wow, when I tried to go to [a] Raptors game, the CFL told me I couldn't go," Banks wrote. "I ain't snitching, but shit fishy!"

Just coming back from #Argos practice pinball Clemons spoke to the team after practice. Argos personnel staff say they are waiting for decision from #CFL on MBT‘s status @CFLonTSN

Argos personnel staff told TSN's Matthew Scianitti that the team has yet to hear from the league on Bethel-Thompson's status.

Should Bethel-Thompson be unable to play on Sunday, Antonio Pipkin would likely get the start at pivot for the Argos. Quarterback Cole McDonald is also on the club's roster.