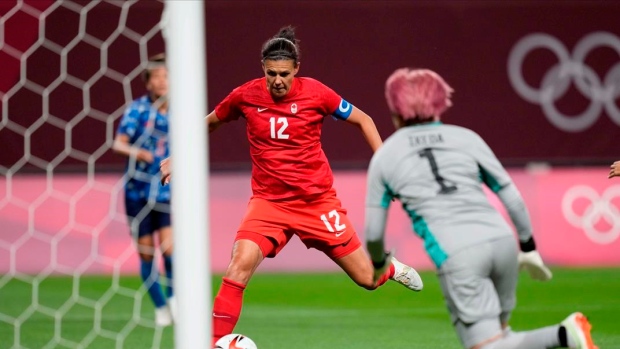 Canada’s women’s soccer team ended the group stage of the Tokyo Olympics with a 1-1 draw against Great Britain on Tuesday. The Canadians finished with five points (one win, two draws), good for second place in Group E, behind the Brits.

“We’ve gone undefeated, and you can’t scoff at that in an Olympic Games,” said head coach Bev Priestman. “I think we’ve grown through the group phase.”

Canada will now face Brazil in the quarter-finals on Friday in a rematch of the bronze-medal game from the Rio Olympics in 2016, which the Canadians won 2-1.

It has been an up-and-down tournament so far for Canada, ranked eighth in the world. The team has shown glimpses of a squad aiming for a third straight podium finish, but inconsistencies have crept onto the pitch.

Here are some of the biggest takeaways from Canada’s performance in the group stage.

Fullback Ashley Lawrence has once again been one of Canada’s brightest stars, playing all but 10 minutes for the team so far this tournament.

Not only is she a strong defender on the flanks for the Canadians (she denied Great Britain’s Rachel Daly of a prime scoring chance in Tuesday’s game), but her ability to jump into the attack and find her teammates inside the 18-yard box is world class.

There was no better example of this than Tuesday’s game against Great Britain, when Lawrence made a terrific run down the left side and perfectly set up Adriana Leon to give Canada the 1-0 lead.

It was reminiscent of a similar play Lawrence made in the 2016 Rio Games in the bronze-medal match against Brazil, when she once again sprinted down the left flank to set up Deanne Rose for the opening goal.

Midfielder Quinn has been enjoying the best year of their career. After making their presence felt in the game against the Americans in the SheBelieves Cup in February, Quinn has continued to play with a high level of confidence. Their work rate has been top notch, as they are consistently able to disrupt the opposition’s attack while also connecting with their teammates up front.

This is their second Olympics, and Quinn also made an impact in Rio 2016, most notably setting up Melissa Tancredi on the winning goal against Germany in the group stage.

While they have yet to get on the scoresheet in Tokyo, they have come close. In the game against Chile, they played a lovely through ball for Janine Beckie that resulted in a chance for Rose.

Quinn also made history in the opener against Japan, becoming the first openly transgender athlete to compete in the Olympics. They posted a statement on social media that read, in part: “Mostly, I feel aware of the realities. Trans girls being banned from sports. Trans women facing discrimination and bias while trying to pursue their Olympic dreams. The fight isn’t close to over… and I’ll celebrate when we’re all here.”

Canada’s biggest strength for many years has been the play of the team’s backline.

Heading into the Tokyo Olympics, the squad had posted clean sheets in four straight matches, including one against sixth-ranked England. The only goals Canada had allowed this year prior to Tokyo were against the top-ranked Americans and Brazil.

But Canada has conceded a goal in every match so far this tournament, and two of those have come in the final 10 minutes of games where Canada was leading.

In the 84th minute of the opener against Japan, Mana Iwabuchi was able to find space between centre-backs Kadeisha Buchanan and Shelina Zadorsky, and fired a shot past goalkeeper Kailen Sheridan, who looked out of position.

In the final five minutes versus Great Britain, Canada was unable to clear, and a Caroline Weir shot from well outside the box took an unfortunate deflection off Nichelle Prince that sent Stephanie Labbé scrambling, unable to stop the ball from crossing the line.

“It’s been the story,” Priestman said about surrendering late goals. “For sure you can see the players are disappointed that they gave that up.”

Adding to the struggles: Chile scored its lone goal of the tournament against the Canadians. Zadorsky was called for a reckless foul inside the area, and Karen Araya converted the penalty past Sheridan.

Brazil has had little difficulties scoring goals this tournament, with nine goals in three games, so it’s imperative that Canada regains its defensive composure for the knockout round.

As is often the case, a lot of the questions surrounding Canada are about the team’s ability to put the ball in the back of the net, especially for anyone not named Christine Sinclair.

The captain did net her 187th international goal in her 300th cap against Japan, and some concerns about secondary scoring were assuaged with Beckie recording a brace versus Chile, as well as Leon’s goal in the group stage finale, where Sinclair did not see any time on the pitch.

But while Canada has dominated possession in two of its three group stage games, there has not been much in the way of dynamic play. Moments of creative flair from the team have been largely overshadowed by stagnant movement and aimless crosses, and a lot of these struggles can be connected to a lack of chemistry in midfield.

Priestman has tried several different combinations in Canada’s midfield, but she has yet to find the optimum formation.

In the opener against Japan, Canada rolled out Quinn, Jessie Fleming and veteran Desiree Scott. In the following match versus Chile, Julia Grosso started in place of Quinn, who did sub in later in the game. The group stage finale saw Beckie, Quinn and Sophie Schmidt get the start in the middle of the park.

Individually, there have been strong performances. As mentioned, Quinn has been one of Canada’s most consistent players. Grosso looked stellar in her Olympic debut with a lot of confidence on the ball. In the match against Japan, Beckie had more of an impact when she pushed backed to midfield than when she was playing up front.

Fleming, usually one of Canada’s most creative players, has been quiet so far. The 23-year-old helped set up the winning goal in the bronze-medal match in the Rio Games, but she yet to make her impact in this tournament.

Canadian fans saw a glimpse of what Fleming can bring towards the end of the game against Chile when she was able to press more and create a few chances, but these moments have been few and far between.