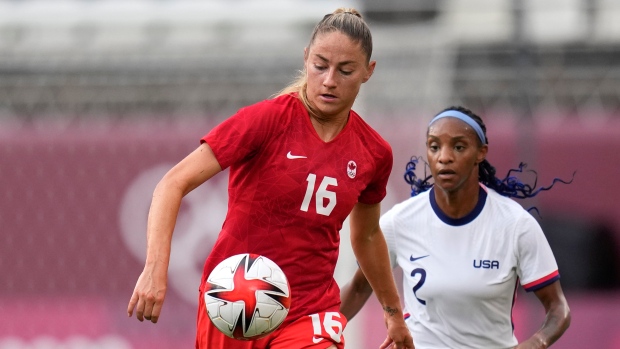 “If other teams at this point don't respect us, then they're just in for a rude awakening when they get to play us next,” she told TSN over Zoom on Friday.

It’s been just over a week since the Canadian women’s soccer team captured gold at the Tokyo Games, defeating Sweden on penalties in the final.

While several members of the team have returned to their clubs, Beckie, who is a dual Canadian/American citizen, travelled home to see her family in Denver. She is currently visiting friends in Texas before flying to England to rejoin Manchester City.

On paper, Canada’s unprecedented achievement – its first title at a major tournament – should vault the team into the conversation as heavyweights in women’s soccer.

But Beckie is doubtful that the perception of Canada will change.

“I don't think that we still have the respect that we deserve, which is unfortunate, because for the last decade we have been up there with the best of them,” she said.

“We are currently the best team in the world. That's the reality. And a lot of people can't handle that, don't want to believe it, because we don't have a team full of superstars. But we have a team full of really good players and I don't think that that is respected around the world yet.”

Canada, currently ranked eighth in the world, has in many ways been a perennial underdog. Very few, if any, pundits outside of the country picked the Canadians to reach the Olympic podium for a third straight tournament.

Even with a gold-medal performance, there have been some critics trying to add asterisks to the achievement by pointing out so-called flaws, such as Canada needing to win on penalties for two of its knockout round games, or the team’s overall lack of scoring, with six goals in six games.

“People can say all they want about, ‘Oh, you got lucky, you scored a penalty, or in the Sweden game, Sweden was better.’ But at the end of the day, we don't concede goals because we play very good defence and we have attacking threats on the field,” Beckie said.

Canada’s defensive organization has long been the team’s main identity and shutting out the dynamic offences of both Brazil and United States is certainly no small feat. But Beckie believes the team’s greatest strength is its bond.

“I really don't know if we would have achieved what we did if there was one person different in this group. It was just like the perfect storm of people, experience, circumstance,” she said.

A quick scroll through any of the player’s social media accounts will reveal the solidarity among the players. Simple things like having a team-wide Mario Kart tournament (which defender Vanessa Gilles will happily tell you that she won) have created a tight-knit unit both on and off the pitch.

“I think it goes without saying that culture is definitely our X-factor,” said Beckie. “And our relationships off the field – I think we did the best job we ever have of bringing them onto the field and having that camaraderie and the connection on the pitch like we do off.”

While Beckie will adamantly defend her team’s performance, she is admittedly much harsher when it comes to assessing her own play.

“I'm a huge self-critic. It's something that I'm trying to get better at,” she said with a laugh.

When asked to evaluate her performance during Tokyo, the Canadian forward said she didn’t think it was bad but added that at times she was frustrated with not being able to contribute offensively as much as she would have liked.

Head coach Bev Priestman has put the focus on team defence, which asks a lot more from attacking players like Beckie in terms of tracking back.

“In my mind, I'm a goal scorer for this team. I'm someone that creates, and I just thought that there were missed opportunities that could have really changed some of the reality for the team in a tournament,” she said. “But I also am really proud of the role that I did have to play, which was a much more defensive role.”

Beckie did finish with two goals in the tournament, which both came in the group stage match against Chile. She netted the brace after having an opportunity to open the scoring on a penalty, but her shot clanged off the post.

It could have been a moment of déjà vu for Beckie. At the 2019 FIFA Women’s World Cup, she had her penalty attempt saved in the round of 16 match against Sweden, a game that Canada ultimately lost 1-0.

But following the miss against Chile, there was never a moment of despondency from Beckie. She simply got herself right back into the play.

“Obviously, the circumstance was quite different than the last time I missed a penalty in a world tournament. So, I think the initial the pressure wasn't as high. But I was, to be quite honest, quite pissed off that I hit the post because I had been hitting such good penalties,” she said with a slight laugh.

Perhaps Beckie didn’t have quite the performance on the scoresheet that she would have hoped for, but her impact was felt beyond the statistics. She calls herself a vocal leader on the team, and nowhere was that more evident than after her first goal against Chile, where she immediately gathered her teammates around her.

“I remember just thinking, these are the moments that kind of define us as a team,” she said. “I just think I said, ‘Let's keep putting the hammer down and score as many goals as we can in this game and keep the level high.’ I think it was just a moment of emotion and passion.”

One other defining moment came after Canada defeated Brazil on penalties in the quarter-final. Captain Christine Sinclair had been Canada’s first shooter, but she had her attempt saved. Canada’s next four shooters all converted, and goalkeeper Stephanie Labbé came up with two huge saves to seal Canada’s win.

Afterwards, Sinclair was clearly very emotional, and Beckie came to embrace her captain. TV cameras captured Beckie, forehead-to-forehead with Sinclair, telling her, “We’ve got you.”

“No matter what happens, we have each other's backs,” said Beckie. “I know how that feels [to miss], and so I want her to know that it wasn't even a thought in anyone's mind. No one cared that she missed, essentially… So, to be able to pick her up in that moment and just say, ‘You know what? You don't have to carry the load. We’ll do it.’ was special.

“Her winning the gold medal will always be my favourite memory from this this tournament. We were able to give that to her after the career that she's had.”

Beckie’s focus now turns to Manchester City, with the team beginning its 2021-22 season on Sept. 4. She said she is bringing the gold medal with her to Manchester but promised “not too much” trash talking would be directed at her teammates, many of whom played for Great Britain in the Olympics.

On the international stage, Canada’s next big test will be the 2023 FIFA Women’s World Cup in Australia and New Zealand, with qualifying getting underway next year.

Canada has yet to translate its Olympic success to the World Cup, as the team has not made it beyond the quarter-finals since 2003. But Beckie believes the squad now has a new swagger.

“I think world championship confidence is something this team has needed for a long time,” she said. “We're such a humble group. I think everyone knows that. So, a little bit of confidence and arrogance is probably not a bad thing for our group. I think it'll just propel us to having really good performances and really, truly knowing we can beat anyone on any given day.”