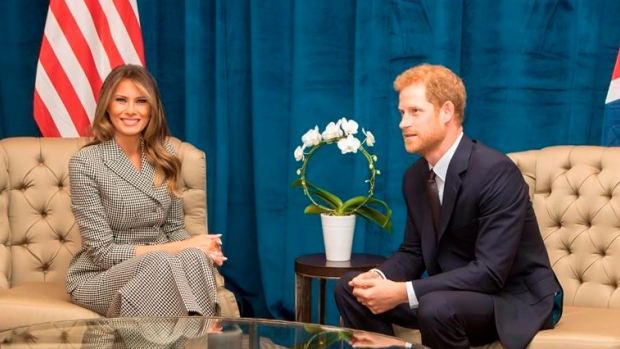 Trump also applauded the team members Saturday for their contributions, calling them "our heroes."

"On behalf of my husband and our entire country, I want to thank you and your families for all you have sacrificed to keep us safe," she said at a reception at a downtown Toronto hotel for the nearly 100 U.S. athletes competing in the Invictus Games, a creation of Prince Harry.

"I also want to wish you good luck, though I know you won't need it in these Games," Trump said. "Take that fighting spirit that I know you have and bring home the gold."

Her first piece of business after arriving earlier Saturday was to visit with Prince Harry.

Trump was heard telling the prince, whom she was meeting for the first time, that she had just arrived on a flight from Washington. U.S. President Donald Trump was spending the weekend at his golf club in central New Jersey.

"Nice to meet you," Harry said as they were introduced and shook hands. They stood together and smiled for the British and American news media before sitting in adjoining club chairs placed in front of their countries' respective flags.

Harry remarked on how busy the first lady has been. She was in New York this week for Trump's address to the UN General Assembly, delivered an address of her own at a UN luncheon, and on Friday joined children from the Washington area to plant, harvest and wash vegetables grown in a garden on the White House lawn.

"Yes, very busy," she said, before offering a compliment in return. "You're doing a fantastic job," she said.

Stephanie Grisham, a spokeswoman for the first lady, said she and Prince Harry chatted about the competition during their approximately 20-minute meeting and joshed about which country would take home the most medals. She also invited him to the White House the next time he visits Washington.

Later in the day, the first lady met with Prime Minister Justin Trudeau, his wife Sophie Gregoire Trudeau and two of their three children before the opening ceremonies of the Invictus Games.

"So beautiful," Trump said to the two Trudeau children, Xavier and Ella-Grace. "I'm so glad you joined us."

She then asked where the youngest child was, three-year-old Hadrien.

"It's bedtime for him, so he's not here tonight," Trudeau said.

Grisham said the first lady feels strongly that service members, veterans and their families should be honoured daily and that her decision to lead the delegation reflected her "utmost respect" for their hard work, courage and sacrifices.

Prince Harry, a military veteran who served two tours of duty in Afghanistan, established the Invictus Games in 2014 for sick and wounded service members and veterans from around the globe.

London was the setting for the inaugural event in 2015, followed by Orlando, Fla., last year.

— With files from Liam Casey, The Canadian Press