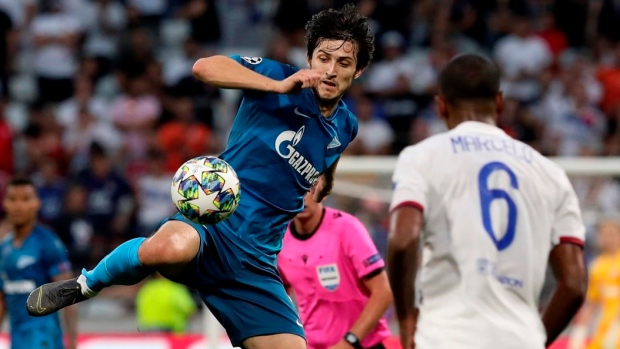 LYON, France — Memphis Depay's second-half penalty salvaged a 1-1 draw for Lyon at home against Zenit St. Petersburg in the Champions League on Tuesday.

Zenit took the lead through a goal from Serdar Azmoun in the 41st minute before Depay was tripped on the edge of the area by Magomed Ozdoev, who had just come on as a replacement for the injured Azmoun. The Dutch winger blasted his 50th-minute penalty into the bottom-left of the goal, leaving goalkeeper Andrei Lunyov no chance.

It was a frustrating night for Lyon, which had gone close with a header by Marcelo in the first half, and could have won the game in the second if Jeff Reine-Adelaide's shot hadn't gone narrowly wide.

Azmoun became the first player to score in this season's Champions League, shooting low in the 41st after a one-two with Artyom Dzyuba. He had suffered an apparent ankle injury just before the goal and was substituted early in the second half.

He was also the first to have his goal checked by the video assistant referee system, which helped referee Michael Oliver dismiss Lyon's protests of offside. The VAR system was only used in the knockout rounds last season and was making its debut in the group stage Tuesday.

Group G is widely considered the most open of this year's Champions League, and also includes Benfica and Leipzig.