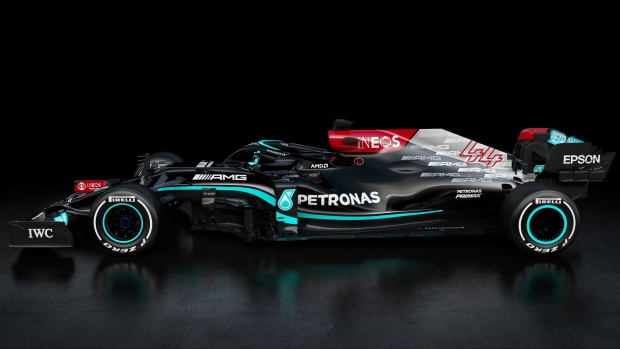 Mercedes unveiled their W12 car for the 2021 Formula 1 season, retaining the black livery they first used on the W11 during the 2020 season.

Mercedes switched to the black livery before the pandemic-delayed season began as a show of support for diversity. Mercedes driver and seven-time World Champion Lewis Hamilton has led a lot of the efforts in the sport against racism and discrimination.

The new car carries over many of the features of last year's championship-winning car and Mercedes technical director James Allison held close to the vest where the team spent their two development tokens for the year. Allison also admitted the launch car did not feature some of the aerodynamic upgrades the race car will have in an attempt to limit the time rivals have to copy any features ahead of the season.

Ahead of last season Racing Point, which has since been rebranded as Aston Martin and will launch their 2021 car on Wednesday, made headlines when their car appeared to be a very close copy of the Mercedes. Rivals dubbed the Racing Point car the 'pink Mercedes' because of its likeness to the Mercedes car and its pink livery. Racing Point jumped from seventh in the Constructors' standing in 2019 to fourth in 2020.