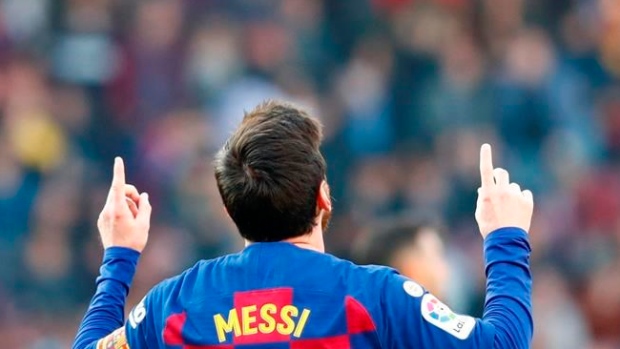 For Napoli, there is no comparison between Lionel Messi and Diego Maradona.

Messi will finally play in the stadium where fellow Argentina great Maradona achieved some of his most memorable exploits. He and Barcelona will face Napoli at the San Paolo Stadium in the Champions League round of 16 on Tuesday.

“At the moment Messi is the strongest player in the world,” Napoli forward Lorenzo Insigne saidon Monday. “But comparisons don’t exist for us, because for us Neapolitans, Maradona is sacred. Taking nothing away from Messi, who remains a really great champion.”

After leaving Barcelona, Maradona led Napoli to its only two Italian league titles, in 1987 and 1990. He also helped the club win the 1989 UEFA Cup.

Messi and Barcelona have never played against Napoli, and the 32-year-old Argentina star said recently he is excited to finally make it to San Paolo Stadium.

“I have wanted to go to that stadium for a long time, but we have never had the chance,” Messi said. “Finally, the moment has come and I’m very excited to see what it’s like, even if it’s different now.

“The experience of playing there will be very nice. People are very passionate there and they dreamed that if Maradona came there, why can’t Messi come? Yes, I know the Neapolitans are crazy about football. I had teammates that played there ... (they) told me that they live for this and I’m very excited about going there.”

Both teams changed their coaches after the group stage, with Gennaro Gattuso replacing Carlo Ancelotti at Napoli in December and Quique Setién taking over from Ernesto Valverde in January.

Both will be debuting in the Champions League as a coach.

“Well its undoubtable that it’s my first game in the Champions League, it has a special motivation behind it,” Setién said. “It’s most exciting for me to start this stage in a stadium like this, which is full of passion, full of history.

“It’s a game that I think is going to be exciting. I hope that it goes down in memory because we have played well and showed personality. There is no better start than playing at a stadium like this.”

Both teams are also emerging from difficult periods this season.

Napoli has won six of its last seven matches in all competition after a dismal start to Gattuso’s reign following a chaotic end to Ancelotti’s time in charge.

Barcelona's fourth straight league win at the weekend helped ease some of the pressure on club president Josep Bartomeu, who was jeered by part of the crowd amid one of the club's biggest crises. They include a divisive coaching change and public conflicts between players and club directors.

“Not very much has been spoken about in the dressing room about what’s happened,” Setién said. “I’m sure they’ve got it all in mind but I think we’re on a very good dynamic, a very positive dynamic.

“I think the team are in a very good moment now, so are Napoli, that’s true. There’s positive morale and I am very confident we can continue this dynamic, knowing that this will be a tough game.”

Gattuso won the tournament twice as a player with Milan. His Rossoneri team came up against Messi’s Barcelona eight times — although they never faced each other because either him or Messi were always absent.

“What Messi does is something I only see on the PlayStation when I play with my son,” Gattuso said. “He’s a champion, who has statistics that will never be repeated and who is also an example for kids for the way he’s conducted his career.

“He’s been doing unimaginable things for years, the only difference is that today he has a beard, but he remains the best in the world.”

Worryingly for Napoli, Messi comes into the match in top form, having ended a four-game scoreless streak with a four-goal performance in Saturday’s 5-0 rout of Eibar in the Spanish league.

This could prove to be a crucial week for Barcelona, which also travels to Real Madrid for the “clásico” on Sunday. Barcelona is two points ahead of second-placed Real Madrid in the Spanish league.

“Every game sets up the next game. The game tomorrow I’m sure will influence what happens on Sunday,” Barcelona defender Gerard Piqué said. “Winning tomorrow helps us to be more confident and more calm for Sunday’s game against Real Madrid.

“We hope that tomorrow will be another step forward to continue growing as a team.”