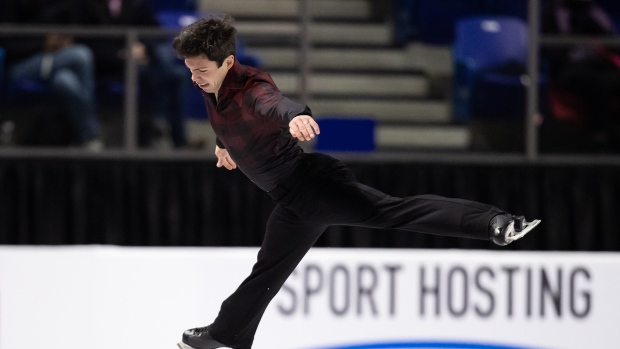 VANCOUVER — Managing to earn a gold medal on a night when they didn’t skate their best shows the potential Piper Gilles and Paul Poirier believe they possess as they prepare for the Olympic Games.

Gilles and Poirier overcame nerves and some mistakes early in their free program to win the ice dance gold medal at the Skate Canada International figure skating competition Saturday.

“We both felt it wasn’t our best skate but we are trying to work on our nerves because we’re not used to skating last,” said Gilles, who was born in the U.S. but has a Canadian mother and grandmother. “It’s kind of nice we aren’t skating perfect right now at the beginning of the season, it gives us room to grow.”

In other events, Keegan Messing slipped from medal contention to finish fifth in the men’s program while Vanessa James and Eric Radford just missed the podium in the pairs competition, finishing fourth in their first Grand Prix event with a score of 187.92 points.

A loud crowd cheered on the skates for the event at the Doug Mitchell Thunderbird Sports Centre at the University of British Columbia.

Gilles and Poirier were first in Friday’s rhythm program. Dancing to the song “The Long and Winding Road” they overcame a few early errors in the free dance for a score of 125.32 for a total of 210.97.

Poirier said the pair is learning to trust its training and ability.

“Today was an example of a performance that a few years ago would have really unravelled,” said the Ottawa native. “We had a really shaky beginning ... but we were able to maintain our composure and trust what we were able to do.”

Canadians Marjorie Lajoie and Zachary Lagha were sixth with 179.07 points while Haley Sales and Nikolas Warmsteeker finished 10th with 156.56.

Messing was third after Friday’s short program with 93.28 points but ran into problems during the free skate, hitting his face on the ice after one fall. He was given a score of 145.06 points, 10th on the day, for a total of 238.34.

“I’m pretty bummed I wasn’t able to give the performance I wanted here today,” said Messing, who was born in Anchorage, Alaska, but whose mother is from Edmonton. "The pride was hurt a little bit today. I’ve been in this sport for 26 years, I’ve had my pride hurt before.

American Nathan Chen took gold with 307.18 points while countryman Jason Brown was second with 259.55. The bronze went to Russia’s Evgeni Semenenko with 256.01.

Chen’s coach Rafael Arutunian was forced to watch from the crowd after his accreditation was removed for an inadvertent violation Friday of the COVID-19 protocols at the event.

“I was still able to focus on my skate,” he said. “He’s taught us to be very self-sufficient. Really nothing changed in that regard.

“What went down was appropriate. It’s reasonable to adhere to the bubble protocol. Keeping us all safe is the whole objective of this bubble.”

In the pairs, James and Radford, who were fifth in the short program, collected 122.62 points in a free skate where James fell once and also had a stumble. They finished with 187.92 points.

“We’re still working on getting that clean program,” said James. “We know we are very capable of doing a very high quality. We are still ironing out the kinks.”

Radford, a two-time world champion and three-time Olympic medallist from Balmertown, Ont., announced in April he was coming out of retirement to partner with James, who was born in Toronto but previously competed for France.

The Chinese pair of Wenjing Sui and Cong Han won gold with 224.05 points. Russia’s Daria Pavliuchenko and Denis Khodykin were second with 193.08 points.

The American team of Ashley Cain-Gribble and Timothy Leduc had the second-best score of 128.22 in the free skate to climb from sixth place after the short program to a bronze with 189.90 points.

“It was a very up-and-down competition for us,” said Leduc. “We are really happy with the result. We worked so hard this season so far. To feel like it paid off is so awesome.”

Kirsten Moore-Towers and Michael Marinaro, who have won the last two Canadian pairs championships, came into the free skate sitting fourth but slid to sixth with 180.25 points.

“Just a bit of a bummer day,” said Moore-Towers of St. Catharines, Ont. “We didn’t complete any lifts today. We’re not sure what the reason is. We’ll just be going home to train to make sure we don’t do that again.”

This report by The Canadian Press was first published Oct. 30, 2021