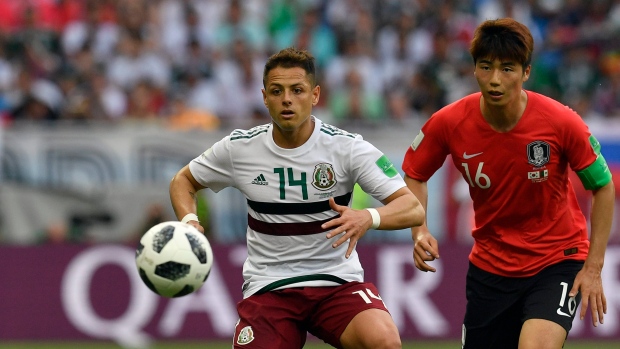 Mexico striker Javier "Chicharito" Hernandez confirmed his move to Major League Soccer with the LA Galaxy on Tuesday, even though the club has yet to make any kind of announcement.

“It was the right time, the right opportunity," the 31-year-old El Tri hitman told the Los Angeles Times.

Sports Illustrated's Grant Wahl reported last week that Hernandez's transfer fee from Sevilla was €8.5 million and his salary would come in at around $6 million per season, just under the wages of Toronto FC's Jozy Altidore and countryman and Los Angeles FC's Carlos Vela at $6.3 million, but the incentives in the deal could take it above that figure to make Hernandez the highest-paid player in the league.

Chicharito's arrival comes following the departure of Designated Player Zlatan Ibrahimovic, who left the club after the expiry of his contract and since rejoined Milan.

Hernandez said the MLS's quality of play might come as a surprise to fellow pros who ply their trade abroad.

“[Mexico and now Galaxy teammate] Jonathan [dos Santos] told me the league is very underrated,” Hernández said. “I really believe you don’t go there to retire.”

Still, Hernandez believes that his move back to North America will be met with disapproval by some.

"People are going to say it was because I couldn’t make it [in Europe], but sometimes in football there are things that are not in your hands," Hernandez said. "The last two years, the managers decided on giving confidence to other players rather than me. And now, the LA Galaxy, the manager of the club and the league, are telling me, ‘Look, Javier, we want to give you all the trust, all the confidence to help us,’ and that’s why I’m taking this opportunity.'"

Hernandez hasn't played in North America in a decade, signing for Manchester United in 2010 from Liga MX side Chivas. He spent six seasons at Old Trafford and one term on loan at Real Madrid before joining Bayer Leverkusen in 2015. He returned to the Premier League in 2017 and spent three seasons at West Ham before heading back to La Liga with Sevilla in the fall.

Internationally, Hernandez has been capped 109 times by El Tri and has appeared at three World Cups.

The official unveiling of Chicharito by the Galaxy is expected later on Tuesday.