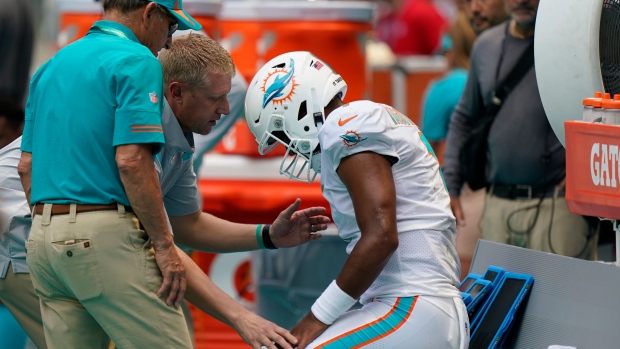 The Miami Dolphins will be without the services of starting quarterback Tua Tagovailoa when they visit the Las Vegas Raiders on Sunday, head coach Brian Flores confirmed on Wednesday.

The second-year pivot has fractured ribs that have made him unavailable.

"This is a tough kid," Flores said. "He wants to play. He’s trying to play. But we’re going to save him from himself."

Tagovailoa, 23, made an early exit in Sunday's 35-0 loss to the Buffalo Bills after a hit from A.J. Epenesa during the team's second drive of the game. While he walked off the field under his own power, the Alabama product was carted to the Dolphins' locker room.

Jacoby Brissett, who will start against the Raiders, took over in Tagovailoa's stead, throwing for 169 yards and an interception.

Through parts of two games this season, Tagovailoa threw for 215 yards on 17-for-31 passing with a touchdown and an interception.

Reid Sinnett, who played his collegiate football at San Diego, will be elevated from the practice squad to dress as Brissett's back-up.