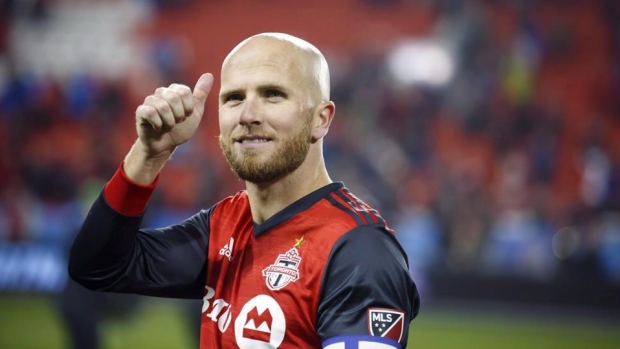 TORONTO — While Mitch Marner's contract dominated Leaf Nation for months, Michael Bradley's future with Toronto FC has been kept under the radar.

Bradley, 32, wanted it that way so as to avoid distractions during the season and the MLS club has honoured his wishes, declining comment this week when asked about the captain's future.

TFC supporters made their feelings known by hoisting a giant banner honouring Bradley in the south stand of BMO Field prior to Sunday's win over Colorado. Underneath the tifo, which showed Bradley applauding the fans, a smaller banner read "Your City. Your Legacy. Our Captain Forever."

For some, it served as a reminder that unlike fellow designated player Jozy Altidore, who signed a three-year contract extension in February, Bradley's status is TBD.

Bradley still isn't commenting on contract negotiations, at least not directly. But the former MetroStars, Heerenveen, Borussia Moenchengladbach, Aston Villa, Chievo Verona and AS Roma man makes no secret of his love for Toronto.

"My position is I love the club, love the team and love the city," the U.S. international said Tuesday when asked about his future in Toronto. "And I've never felt more at home anywhere in my life than here, in every sense — in a sporting sense, in a family sense. That part, that's an incredible feeling.

"When you walk out on the field the other night and see a banner like that, it gives you goose bumps. It's another reminder of how lucky I am to be here to play for this club, to captain this club ... So I'm not going to talk specifically about contracts or negotiations or anything in that way because I said at the beginning of the year that I didn't want anything taken away from the team and the focus of what we're trying to do.

"Everything will get sorted out in the right time. But again, I love it here. I've loved every second here and I certainly hope that I'm going to be here for a long time still."

Over to you, GM Ali Curtis.

While the cone of silence reduces headlines, it does not help season-ticket subscribers wondering about their captain as the deadline to renew approaches later this month.

Contract negotiations with former star Sebastian Giovinco did not go well prior to this season and now the mercurial Italian is picking up a hefty paycheque in Saudi Arabia. TFC officials have to weigh the risk/reward of retaining a 32-year-old midfielder who has become the club's driving force on and off the field.

Re-signing Bradley bucks the league trend of acquiring young stars who might be sold for a profit down the line. But the durable Bradley, with his off-the-chart commitment and work ethic, brings plenty more to the table, albeit at a price.

Bradley shields the Toronto backline. While no Andre De Grasse, he has a good turn of speed over a short distance — which serves him well in his disruptive defensive efforts. He can deliver a pass on a dime, often setting the table for counter-attacks.

Bradley is relentless, detail-oriented and very competitive. He does not suffer fools lightly.

Before every home game, Bradley can be spotted inspecting the pitch well ahead of kickoff. And when players take the field for warmups, the relentless captain is seen reinforcing the message of the day.

Toronto (12-10-9) is 1-3-3 without Bradley in league play this year. It's been an uneven season, with holes in the roster being filled late. But Bradley has been in top gear as the team finds its rhythm in the final weeks of the campaign.

Bradley, whose family has made Toronto its year-round home, is nearing the end of his sixth season with the club and a contract that is paying him US$6.5 million in 2019, tied for second (with Los Angeles Galaxy's Giovani dos Santos) behind Galaxy star Zlatan Ibrahmovic's $7.2 million.

He joined from Roma in January 2014, introduced at a news conference alongside England forward Jermain Defoe, who came via Tottenham. Defoe was the star attraction, as shown by the double-decker bus parked outside the then-Air Canada Centre, complete with an accompanying "It's a Bloody Big Deal!" ad campaign.

Defoe lasted just one season, scoring 11 goals in 19 regular season games before returning to England in a deal that brought Altidore to Toronto.

Bradley, however, has been a constant. Over his six seasons here, Bradley has played 160 regular-season games (14,267 minutes) as well as 12 playoff games. He has 190 career MLS games including his stint with the MetroStars.

Toronto went all the way to the MLS Cup final in 2016, losing to Seattle before winning the championship the next season in a rematch with the Sounders.

Put it another way. Toronto won 51 regular-season games in its first seven seasons in MLS. In the last six, with Bradley in TFC colours, it has won 82.

The club is no one-man band. But Bradley has been a huge piece of the puzzle.

Veteran defender Ashtone Morgan says Bradley has set the tone for the club, helping change the culture of what had been one of the league's doormats into a champion franchise.

"At first it took us a while to get used to him and his mentality, but I feel he's just a true professional," said Morgan, Toronto's longest-serving current player. "For younger guys to see day-to-day how to treat your body, how to approach every day on the calendar year for a football season, you definitely need to look at Michael.

"He's one of the first guys in and one of the last guys to leave — every day. So he definitely puts the work in and applies himself. His leadership is second to none. People at first might see him and they won't fully understand him, they might think he might be too tough or too hard on you but he is who is for a reason. He's a true professional and he's our captain."

And while more than a few reporters have felt Bradley's laser-like eyes bore into them, rookie winger Jacob Shaffelburg sees another side of the skipper.

"He's been really good to me," he said, citing times when Bradley has stayed after practice to work with him.

And Shaffelburg says his teammates see Bradley's sense of humour.

"He's a good mix. He can joke around a bit," said the 19-year-old from Port Williams, N.S. "He jokes around with me trying to (grow) a beard. I'm trying to get one but he always makes fun of that. Maybe one day I'll be able to get one as good as his."

"A great leader," he added.