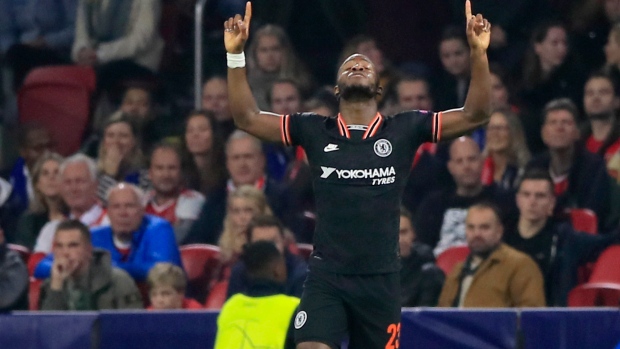 The Belgium striker fired in off the underside of the bar from close range in the 86th, 15 minutes after coming on as a replacement for Tammy Abraham. Another of coach Frank Lampard's subs, Christian Pulisic, provided the cross.

"It's what you want from subs," Lampard said. "Sometimes the toughest part of management is leaving out players that really want to play week in, week out, and you rely on them being positive, coming on and making an impact and they both did. Delighted for them both."

The result left both teams on six points after three matches. Valencia is on four points after a 1-1 draw at last-place Lille in Wednesday's other game.

It was another late Champions League stinger at the hands of a London team for Ajax, which lost the semifinal last season to Tottenham thanks to a Lucas Moura goal deep in stoppage time.

Ajax had come close to taking the lead earlier, but Quincy Promes had a goal disallowed for offside after a VAR review and Edson Alvarez hit the post with a diving header as the Dutch team failed to score after recording 3-0 wins in its first two Group H matches.

Before Batshuayi's late strike, Mason Mount had the only serious chance for Chelsea with a low shot in the 14th that forced a good save from Andre Onana at his near post.

Chelsea's win was built on its energetic pressing, which often knocked Ajax off its usual slick passing game.

Ajax was guilty of loose passes and giving the ball away in its own territory, particularly in the first half, but still managed to carve out the best of the few chances at the Johan Cruyff Arena.

"We weren't good enough on the ball and that led to too few chances," said Ajax coach Erik ten Hag. "It's frustrating."

Two of Chelsea's young rising stars, Callum Hudson-Odoi and Mount caused Ajax problems on the left in the first half as defender Sergiño Dest often pushed forward looking to attack.

But it was Ajax that had the ball in the net first, when Promes slid home a cross by Hakim Ziyech in the 35th minute only to have the effort ruled narrowly offside by the video assistant referee.

Promes was onside five minutes later when he took the ball at the end of a flowing Ajax move from right to left, but this time he was denied by a strong sliding block by Cesar Azpilicueta.

Alvarez came close to giving Ajax the lead after the break, but his diving header from a corner flashed across the face of the goal and deflected to safety off the far post.

Lampard brought on Batshuayi for the largely ineffective Abraham and Pulisic replaced Willian giving Chelsea fresh impetus in attack. Batshuayi spurned one great chance by firing over the bar before the two substitutes combined for the winner.

Pulisic dribbled past Dest, his United States teammate, before delivering a low cross into the box that Batshuayi coverted with his left foot, with the ball going in off the underside of the crossbar.