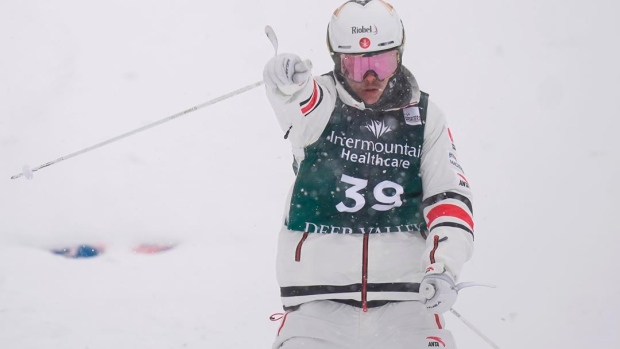 Kingsbury, from Deux-Montagnes, Que., won two World Cups and two world titles last winter after returning from a back injury that came at the same venue he conquered on Saturday.

"Today feels a bit like redemption," Kingsbury said. "Starting the season on a high note takes some of the pressure off. In 2017, I won here before heading to the Olympics. Hopefully things will go the same way this year.”

Kingsbury, who'll be a favourite to win another Olympic title this February in Beijing, earned his 66th career World Cup win.

He finished with a score of 82.99 points, finishing just ahead of Kazakhstan's Pavel Kolmakov (82.10). Japan's Ikuma Horishima was third with 81.12.

Kingsbury fractured his T4 and T5 vertebrae during a training run late last year, forcing the Olympic champion to miss the first three World Cups of the season.

"It's great to get a win after missing out," Kingsbury said.

Two other Canadian men finished in the top 20 on Saturday. Kerrian Chunlaud of Ste-Foy, Que., was 17th and Brenden Kelly of Pemberton, B.C., was 18th.

Montreal's Chloe Dufour-Lapointe was 12th in the first women's final and did not advance.