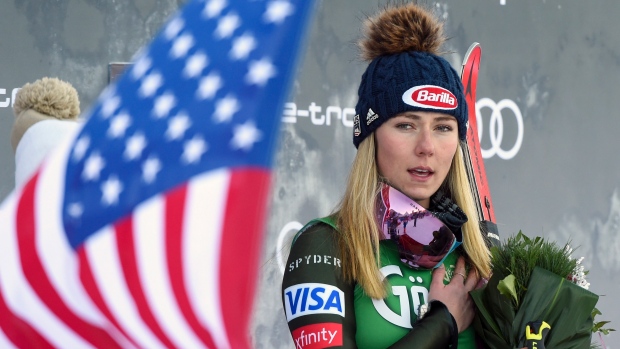 LIENZ, Austria — Mikaela Shiffrin wrapped up an eventful return from her 11-day break from World Cup racing on Saturday, dominating a giant slalom for her 63rd career victory and moving into outright second place on the women’s winners list.

After nearly arriving too late for the opening run, Shiffrin posted the fastest time in both legs to win by a big margin of 1.36 seconds.

Having misread the local start time of 10:15 a.m., the American three-time overall champion was preparing for a 10:30 start.

Shiffrin had to interrupt her usual warmup routines to make it to the start gate in time but made no mistake once on the course.

And she doubled her advantage in the second run.

After finishing, Shiffrin briefly looked up to the large video wall displaying the times, then crouched down for a few seconds, briefly pumped her fist and lay down in the snow.

“It was a big fight today. It’s the way I like to ski,” Shiffrin said. “I did the very, very best that I could do. And it was some of the best GS skiing I have ever done.”

Marta Bassino of Italy, who won the GS in Killington last month, finished second, while Austria’s Katharina Liensberger finished 1.82 back in third to match her career best result.

Shiffrin opted out of the Val d’Isere races last weekend after finishing a disappointing 17th in a mid-week GS in another French resort, Courchevel.

The events in Val d’Isere were then cancelled because of bad weather.

“It sounds pretty stupid to say I lost a lot of confidence after the last year,” said Shiffrin, referring to her record-breaking season with 17 World Cup wins.

“I was so mad at myself for making some of the decisions about the schedule that I did,” said Shiffrin, adding she put herself “in a position in Courchevel where I was not even able to perform in the right way.”

Shiffrin trained a few days in Courchevel, took three days off, and had a four-day training camp in Italy to get ready for the final races of the calendar year.

“I had a lot of doubts. The training I had the last week was really good so I trust in that,” she said. “I wasn’t really expecting to win today. I was just trying to do better than what I did in the last GS.”

Shiffrin’s preparations paid off, as she had an attacking but near-flawless first run, carving out a commanding lead over Italian rivals Bassino and Federica Brignone by 0.61 and 0.74 seconds, respectively.

Shiffrin came wide on a sharp left turn which caused many racers problems, but she got back to the ideal race line without braking.

In the final run, she initially had her lead over Bassino reduced to one-third of a second but accelerated in the second part to add a full second to her lead.

A slalom at the same course is scheduled for Sunday. Eight years ago, this was the race where then 16-year-old Shiffrin earned her first World Cup podium.