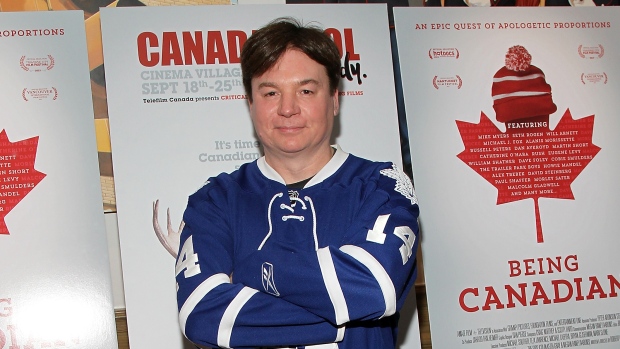 TORONTO (September 6, 2017) – Legendary Canadian actor, author, director, and multi-faceted creator Mike Myers, OC was announced today as an Official Ambassador to the Invictus Games Toronto 2017, presented by Jaguar Land Rover. The Scarborough, Ontario native’s connection to the military runs deep as the son of Alice and Eric Myers who served in the Royal Air Force and British Army respectively.

“I am thrilled to be able to participate in an active role at the Invictus Games, taking place in the city where I grew up,” said Mike Myers. “The military background of my parents, who both served in Britain, makes this a cause that is near and dear to my heart. I am so honoured to be part of a Games where the focus is on supporting active service members and veterans who have given so much to their countries.”

In 2016, Myers appeared in support of the Invictus Games in Orlando. While there, he spoke passionately about the importance of generating a wider understanding and respect for servicemembers and their families and caregivers.

During the 2017 Invictus Games Opening Ceremony, Myers will be delivering an inspiring tribute to the host nation, Canada. He will also be participating in the official Games Opening press conference on September 23.

“I can’t think of a bigger champion of Canada, the City of Toronto and our military than Mike Myers,” said Michael Burns, CEO, Invictus Games Toronto 2017. “He’s a great talent and passionate about caring for our ill, injured and wounded warriors. He’s going to help us shine a bright spotlight on all the heroes and their families at the Invictus Games.”
An Official Ambassador program is a long-standing tradition with international multi-sport Games. Having the support of some of the world’s leading voices infuses excitement into the Invictus Games Toronto 2017, presented by Jaguar Land Rover. Leaders across many fields including, entertainment, science, business, and social media have stepped up to show they #RiseTogether with our wounded, ill, and injured servicemembers and veterans.

“As presenting partner of the Invictus Games, Jaguar Land Rover is grateful to Mike Myers, a proud Canadian and all of the ambassadors, for their support of the Games,” said Wolfgang Hoffmann, President, Jaguar Land Rover Canada.

Myers will help kick off the Games during the Opening Ceremony at the Air Canada Centre on Saturday, September 23. The Ceremony will feature musical performances by Alessia Cara, TheTenors, Sarah McLachlan, La Bottine Souriante and Laura Wright, also an Official Ambassador to the Games.

About the Invictus Games Toronto 2017

The Honourable Kent Hehr, Minister of Sport and Persons with Disabilities

“As someone with personal experience in both sport and disability, it will be great to see athletes’ abilities on display at the upcoming Invictus Games in Toronto,” said the Honourable Kent Hehr, Minister of Sport and Persons with Disabilities. “It is terrific to see Mike Myers, a true Canadian talent, announced as an official ambassador for the Games. With his and other prominent names supporting and spreading awareness for the Invictus Games, I know the Games will be a tremendous success and will celebrate these athletes’ abilities and past military service. Let’s all #RiseTogether in Toronto to support all of the inspiring athletes of the Invictus Games!”

“We’re thrilled to have a well-known Ontario-born actor as part of the 2017 Invictus Games Ambassador line-up,” said Eleanor McMahon, Minister of Tourism, Culture, and Sport. “Mike Myers continues to make Ontario proud and I admire his commitment to supporting the Games and showcasing the power of sport. I look forward to watching an exciting week of competition and honouring the dedication and strength of the service members and veterans.”

"I commend the very talented and well-respected individuals who have lent their names to the Games, including homegrown talent Mike Myers! Their support will help garner more attention for these very important Games which Toronto is proud to host," John Tory, Mayor of Toronto, Host City.